Heliod, The Vengeful
by WUBRG87 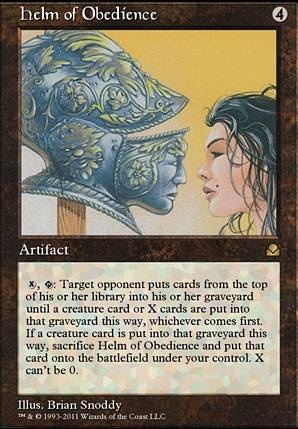 Yo! Had some problems with Godo, Bandit Warlord stax. What do you think of Heliod's Intervention?

I think you may want to up the number of boardwipes in the deck. Even limiting how many spells your opponents are casting each turn, it can still be hard to stay up on cards vs 3 or more players with so many 1 for 1 counters/removal spells. While you have some card draw in the deck, it will come in more in a trickle and that may not be enough. Maybe Thassa's Intervention subbed in for one of the other counterspells may help and Heliod's Intervention used on a end step where you didn't have to counter anything to take out 3 or more problematic targets.

BaneOfLordran Thanks for tagging me.

I think conceptually this can work. I certainly hate it whenever anybody steals my stuff, but I think it's a bit naked. If I were playing an aggro deck, I wouldn't attack any of your plainswalkers and I would just go for the kill. I run a ton of control in my Grixis Fires deck, which is really just a Sarkhan Superfriends with Fires, and even then I run Acolyte and Ral to copy and recur my spells. I find that I need every bit of it to stay alive. I think my main concern is that you only have four Role Reversal and if everything goes great your using it on turn four. Imo, without additional blockers or removal it's going to be too little too late.

One thing I think, and forgive me for being unoriginal, is you should remove the 4 Callous Dismissal and add 4 Fae of Wishes. I often resort to casting my first one as a blocker and she is a great two-drop for stalling aggro. I would also mainboard 4 Deafening Clarion and probably take out the Divine Visitation It's a great card, but if you've got 5 mana and Elspeth or Saheeli out, I would hope Sarkhan is providing all the beats you need. If you want to have enchantments to trade what about Ashiok's Erasure I think the middle ability would turn against you, but the spell would remain countered.

Other than, that I think if you do add Fae of Wishes, you would reconstruct the sideboard with more removal and/or plainswalkers. Instead of trading enchanments, just throw one or two Heliod's Intervention. Embercleave falls off Sarkhan every turn, so that's something to think about. Adding Fae does mean that Narset, Parter of Veils becomes a pain in the ass though, and for that reason she is cut from my deck. That's my thoughts on it. i would be interested to hear how it plays, and what you settle on.

Hey, what's the max budget you have to make upgrades?

It can be a long process to upgrade an entire precon. What the precon really lacks is ramp, tutors and cards for better interaction with Ghired. The manabase in the precon can be upgraded with better dual lands, but casually is actually fine the way it is. Draw sources is one thing that the precon has a lot of which is surprising.

This is a summary list of some budget cards ($5 or less each, most are less than $1) that I think would help your deck:

The avg. CMC (converted mana cost) of the precon is high at 3.9. This 3.9 number means that consistently you're not able to cast a spell until you have four mana sources and/or four lands which is slow. Consider reducing this number? Getting it down to 3.0 and then even lower after that. To do this consider cutting many high mana cost cards and replacing them with low mana cost ramp? Reducing the avg. CMC will speed up game play.

The most obvious upgrades to start with are adding more low mana cost ramp and tutors, but other upgrades to consider is how to make Ghired better overall for the deck since he's the Commander General. Casually Ghired is about attacking since he powers your deck's strategy by populating which he does when he attacks. Because attacking is important then consider strategies that can improve combat/attacking? Haste, extra combats and double strike are strong strategies with attacking.

I would make the Rhino the focus of the token population because it's big creature (4/4 trample) and is easily accessible because of Ghired. Because Ghired creates the Rhino token I don't think you need to go over the top with lots of other creatures or cards that create tokens. However, if relying more on Ghired and the Rhino token then consider more repeatable protection for Ghired to keep him alive on the battlefield. Not having to do combat damage with Ghired to populate is nice.

Extra combats are good with Ghired because he wants to be attacking and extra combats means you get to attack again or multiple times on your turn. Aggravated Assault + Savage Ventmaw is infinite combats which is infinite attacks. As long as Ventmaw can attack it makes six mana. Five of that mana can be used with Assault for an extra combat. At the extra combat Ventmaw will attack again and make six mana; use that mana with Assault and repeat. Without Ventmaw Assault is still a very good card because it can be repeatable for five mana on your turn you get to attack twice which can be a lot of Rhinos.

I offer more advice, more explanations about each of these suggestions, more detailed steps you can take to improve your deck, cards you could cut, etc. Would you like more advice?