If a permanent you control would be put into a graveyard from the battlefield this turn, exile it instead. Return it to the battlefield under its owner's control at the beginning of the next end step.

Foretell (During your turn, you may pay and exile this card form your hand face down. Cast it on a later turn for its foretell cost.) 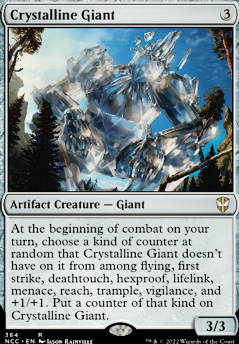 sean360 Thanks for the helpful update! I definitely found it running out of gas earlier as well, which is why I added five more sources of card draw in the recent update, and swapped out some subpar ones I had for better ones. I'll definitely update how I see it working. I'm also considering an incredibly controversial card in the form of Armageddon. Some might be opposed to this, but I feel like with the imbalance green and blue have in terms of ramp and raw, white should be able to use the tools we have to keep up and eliminate unfair advantages. I think we can more quickly rebuild with our curve, and there is of course the nasty combo with Cosmic Intervention to consider. I'm a little conflicted about dipping into the dark side of the social contract, but it still seems fair to me. Nonetheless, I am undecided.

No worries, and you basically already have this so you can ignore this if you want but I'll put it down for posterity.

Cosmic Intervention causes a replacement effect for each permanent you control that would be sent from the battlefield to the graveyard. Then it sets up a delayed triggered ability ("At the beginning of the next end step") for each. They're separate triggers because the way its worded applies to each permanent individually ("If a permanent ... return it to the battlefield"). Because they're separate triggers and you control them all (assuming you didn't control any creatures you didn't own), you get to order them all on the stack as you like.

Eerie Interlude is similar to this except it exiles them all at once, and has only one trigger that returns all the exiled creatures to the battlefield at the same time. Semester's End is the same except it also applies to planeswalkers and has a replacement effect for how they all enter the battlefield (entering with an additional counter).

Sorry I'm getting kinda sleepy, hope that all made sense.

Having followed rules and discussion around Cosmic Intervention and Giada specifically the general consensus was that with Intervention the ETBs happen as separate events, allowing you to re-order, whereas with Eerie Interlude they all happen at once. This could be of course, because Intervention creates separate events initially and that affects the resolution, but that was my reference point, and may not apply to Semester's End, which is more similar to this card.

Now I will say that creatures ETB'ing simultaneously definitely do see each other. I've played enough ETB decks and read enough rules forums to know that! Giada's ability stipulates already as a replacement effect, as you say, so if she isn't on the battlefield before they ETB then nothing happens, hence why after Eerie Interlude creatures may be spared but lose all their counters, whereas Intervention allows her to enter first and repopulate them as one chooses. I honestly haven't researched Semester's End with Giada too much, I mostly play it in my planeswalker deck to save them from attackers, so I could definitely be wrong in that card! In that case I'll take your word for it that the angels enter separately despite the each trigger in which case, yes, they would only get the +1/+1. Thanks for the clarification!

Guerric on Dealing with politics as an â¦

Hi Dazard! What a great question! I avoided aggro strategies for awhile for this reason, but as my sneaky combo strategies are hard for some groups I play with to decode, I decided to make some good old honest aggro decks, and I think I've figured out a good balance.

To begin with, don't play like in a 60 card, 1v1 format. In those games you have little incentive not to go for broke all the time, and to commit all of your resources right away. In EDH there are several key principles of good aggro play.

One of them is controlled growth. Even if you can commit all of your resources to powerful plays early you shouldn't do so. You need to make sure that you set up card draw engines and other things to keep your tank full in the long run. You should be attacking, but keep in mind you don't need to attack with everything. Chip away at peoples' life totals rather than hitting one person hard. Once you slam one person you will be the archenemy of all, so don't do that till you are a turn or two from winning or they will destroy you. Knocking out an opponent early doesn't necessarily help as that person is a target for someone else and can help keep someone else under control.

A second principle is try to win all at once via pump effects. Its almost better to keep your tokens as 1/1s as long as possible and then suddenly in a single turn make them gamewinning with Coat of Arms, Shared Animosity, Jazal Goldmane, or Mirror Entity. Don't play these cards early either! Your opponents will just kill them, so play them the turn that you can win. Surprise is one of the most powerful things in EDH. If they know you can kill them you are a threat, if they don't see it coming you will win.

Thirdly is politics via threat assessment, not deals. Sometimes people just think of politics as bribery, but its better to simply point out what other opponents are doing. "Hmm..he just played Ashnod's Altar. That's a combo piece. What's he up to?" is far more powerful than promising not to attack someone. This is self-interested, but it is also helping your opponents play better by noticing more than obvious threats. When I play against aggro I might have a board wipe, and yet hold off if I'm not afraid of imminently dying to let the aggro player do some of my dirty work for me and keep attention away from the combo I am putting together. My one friend who has been quite good at aggro has become adept at pointing out what I am doing and keeping things honest. It's also a good idea with early attacks to take turns attacking different opponents for only a small amount of damage, or even rolling the dice to see who you'll attack first. If your opponents wonder why you're holding back you can just say somewhat honestly that you're trying to spread the love around and keep blockers and critical pieces in play.

A fourth principle is board state protection. Others mentioned Unbreakable Formation and Teferi's Protection as helpful cards. Don't forget also about Make a Stand, Flawless Maneuver, and Cosmic Intervention. The latter won't save your tokens, but it will save other pieces. The same is true with Eerie Interlude and Semester's End which can also dodge even a Cyclonic Rift. Lapse of Certainty can also delay a board wipe for a turn and waste your opponents' investment, and is good tech as well. Eldrazi Monument is also a good card, because you'll have endless tokens to fuel it, and all of your stuff will be flying and indestructible, keeping your opponents from easily stopping you. One final way in your deck is just by making board wipes painful, which you can do with aristocrats. Blood Artist and Syr Konrad, the Grim will make your opponent think twice about wiping the board. Again, don't commit too many resources at once, and hold up mana for protection. This helps with controlled growth and helps you rest easy during your opponents' turns.

A fifth principle that is great is to always have a backup plane for when things go wrong. One way to do this is to have a single infinite combo to win out of nowhere when things are down. When you're playing aggro opponents are always looking at your board state, but they can be taken by surprise when you combo the win. For Markov the best one is probably Exquisite Blood and Sanguine Bond. If your opponents can win with this stuff then its only fair that you can in a pinch too! This also fulfills the old idea talked about on MtgGoldfish that you should always have a way to win out of nowhere. The other and more honest way to do this is just to have a way to recover your board state. Patriarch's Bidding and Haunting Voyage can help you recover all of your creatures in a single turn. Having these backup plans will make life easier.

Don't get discouraged, aggro is better than ever in EDH today due to new board protection and recovery tech Wizards has printed and reprinted in the past couple of years. All you need to do is master the playstyle and you'll have a lot more fun and success!

Even if Avacyn isn't out, Cosmic Intervention works great with Mass Land Destruction. Just play it and the play Armageddon,or play it in response to Armageddon. People may scoop and you might lose some friends, but if you stick with Avacyn it's the most powerful way to go. Otherwise, switch to Giada with Avacyn as the in-deck commander. It all depends on what you want to do!

Just a recommendation, but I might recommend putting Avacyn, Angel of Hope in the 99 and making the newly spoiled Giada, Font of Hope the new commander. You can still play Avacyn most games, who you can tutor with Search for Glory and Thalia's Lancers, but your opponents won't know when she is coming, which will make her more powerful than if they know that she is your commander. Giada also will help ramp Avacyn and your other angels out, and make each of them far more powerful, and will come out on turn two every game. It might also allow you to play fewer board wipes and more angels, which could be a more fun playstyle for both you and your opponents.

Whether you do the above or not, Avacyn has a weakness when it comes to mass exile or bounce effects like Cyclonic Rift or Descend upon the Sinful, and anthem killers like Black Sun's Zenith. One way to avoid this is with mass blink cards like Cosmic Intervention, Eerie Interlude, and Semester's End, which can dodge any removal or board wipe while keeping your team available for blocking.

Since you have some life-gain matters cards, I'd lean more into it with spells that draw cards off of life-gain like Well of Lost Dreams, Dawn of Hope, and Cosmos Elixir. White needs all the draw it can get!

My deck isn't done yet (though the first version will be out in a few days when I get the cards). Nonetheless, here it is if you want ideas-Giada Angels Tribal I don't have Avacyn yet because I need a Christmas gift or store credit to swing it, but she will eventually go in!

Guerric on Questions about Giada, Font of â¦

Thanks both of you! The tip on Cosmic Intervention is especially nice Neotrup. I am also playing Eerie Interlude, so knowing the difference will be helpful. 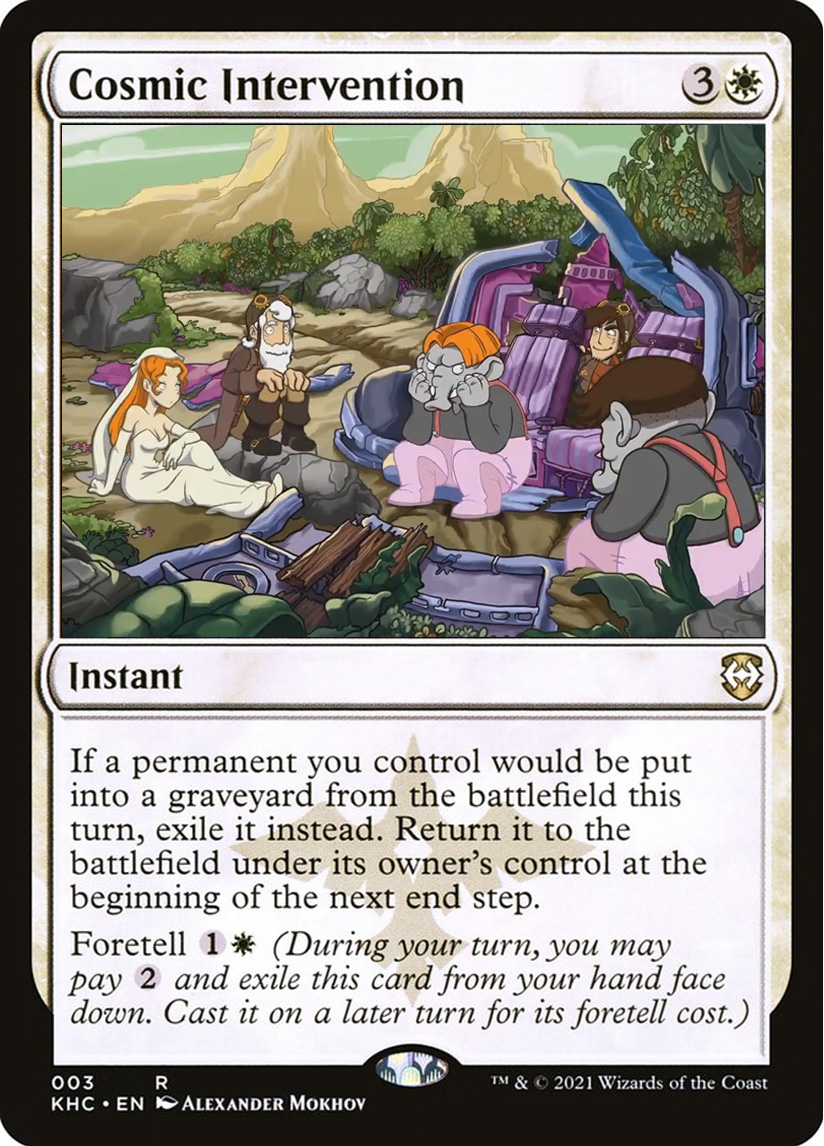 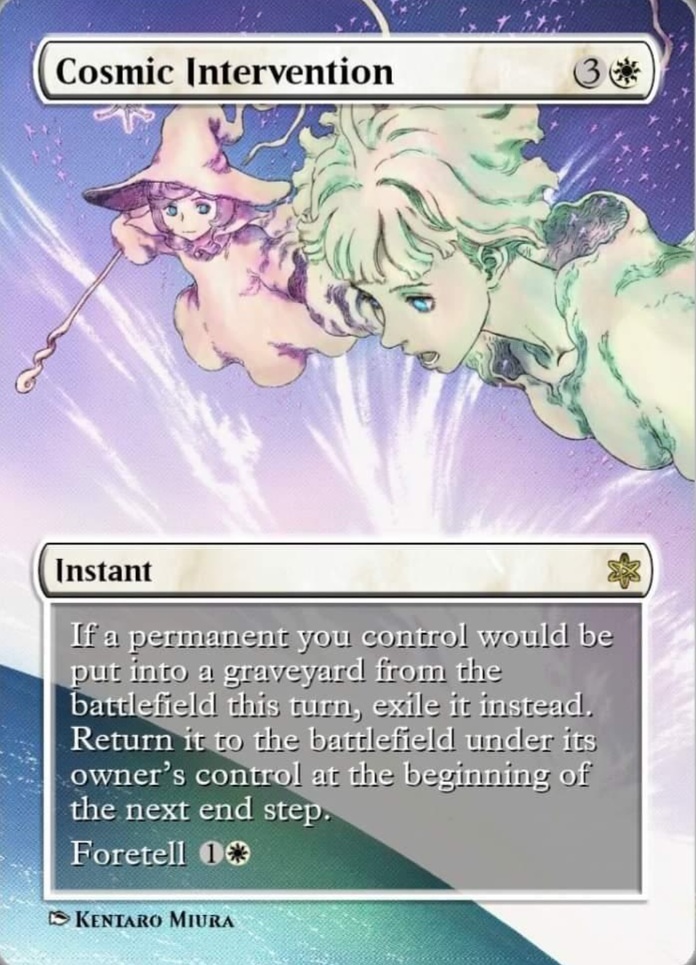