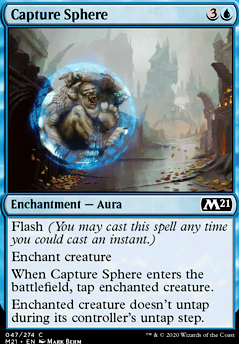 Also, I had Flicker of Fate used against me at a tournament once, damn good flicker. As I said before, Azorius things like Capture Sphere would be good. Crystal Shard might also be good for removal if your opponent taps all their mana sources.

Other suggestions: Rule of Law Silence Deafening Silence The Original One Forced Fruition (To make your opponents not want to cast spells.)

If you aren't going to dump green, then I suggest adding more of its color. Green does have some nice constellation cards, and if you're going to be playing with enchantments like Detention Sphere and Winter's Rest, then things like Nylea's Colossus and Setessan Champion would be great finishers (Here's a link to get some more ideas: preview.tinyurl.com/v2ugy4a). You could drop some things like Castle Ardenvale to add more cards like Capture Sphere. Following the green finishers theme, consider adding things like Manifold Key to make your fatties unblockable. Hopefully this helps!

@Waveblaze, Reviax42, LeafMeAlone, Murphy77, jubale. Thanks to everyone for your comments and suggestions! It feels nice to get so much input on one of my decks! So I took a lot of your guys' advice and changed some stuff up. I removed Tamiyo's Epiphany (it wasn't performing well), Vantress Gargoyle , Into the Story , God-Eternal Kefnet , and Flood of Tears . I put in So Tiny , Unsummon , Run Away Together and Ashiok, Dream Render . I played about 5 games but didn't get a single win, but I did get close quite a few times. I think the issue with Ashiok, Dream Render is that he exiles the graveyard, and it messes up the synergy with So Tiny . I misplayed a few times because of that, because in the back of my mind I was thinking "This is a -6 to attack" when it was only a -2 because their graveyard had been exiled. I think if we're going to do the exile route, we should go with Capture Sphere . It has flash, causes the creature to be tapped, and not untap. This deck was originally relying on cards being in the opponents graveyard, hence Into the Story and Vantress Gargoyle , but I definitely think it performed a bit better with all the low costing cards. I think with some more tweaking, we could get a really solid mill deck for standard. Thanks all again for your input, I'll update the deck list when I get an extra few minutes tonight. Thanks again!

bushido_man96 on Help For Admiral commander

Boy, what a mess. Where to start? Here'a template to use: 10 card draw spells/effects; 10 mana ramp spells/effects (rocks are the best), 5 single target removal spells, and 5 board wipes. That's a start, at least.

From there, pick a path for your deck and cut anything that doesn't lead t the end goal, or doesn't draw or ramp.

Instants: cut out anything that isn't targeted removal or a counterspell for the time being. Try to pull your single-target removal from here, and pick 5 really good ones.

Sorceries: board wipes can come from here. Black offers great wipes, like Damnation , Toxic Deluge , or even Plague Wind and In Garruk's Wake . Blue has fun stuff like AEtherspouts , AEtherize , and the granddaddy of them all, Cyclonic Rift . Pick a few more that go with your theme and are decent, and call it good there.

Enchantments: you can find great card draw spells here. Greed , Arguel's Blood Fast  Flip, Rhystic Study , and others. Find some, put em in, and then decide what you want to go along with the theme of your deck. A single enchantment that makes a single creature unblockable isn't going to be as helpful as you think. There are equipment cards that work better because they can be moved around and have more utility. Prison style enchantments like Capture Sphere aren't going to be that great, either. Removal is better. Scrap all those.

That's a start. Cut the crap out of that list, then give a better description of what you want the deck to do, and we can all help from there.

Enhanced Surveillance is an important sb here as itâs my main defense against someone trying to mill me out, as this deck relies of heavy surveiling. However, I agree that Capture Sphere and Quench might not be up to snuff. Iâll look into swapping a pair of Negate s in for those two.

Sb is pretty all over the place. Have more consistency. Then there are just cards that aren't as powerful. Capture Sphere , Quench , and Enhanced Surveillance is a trap. It isn't good. Perhaps more threats in the sb or just overall better removal. This is a control deck. Where are the Negate s?