I play at PlatinumStarGames in Howell NJ where MTG Muddstah periodically visits, I play at Nova Games a filthy establishment in Freehold/Howell NJ on Sunday's, and I shop at Jiffy Photo in Brick NJ store that has it's inventory perfect, and lastly I play at my friends house steve.

Other then playing the game, building decks is my favorite part of the game. Experimenting new tricks, combos, synergies, playstyles, and politics are what makes the game fun for me.

Portal Three Kingdoms was when I played MTG for the first time maybe 6 or 7 games. It wasn't until Journey to Nyx after the military, when I got hooked into to MTG. Since then I have a new love for the game.

Favorite tribe? _Vampires. Until demon tribe is a thing. Cause demons are cool. 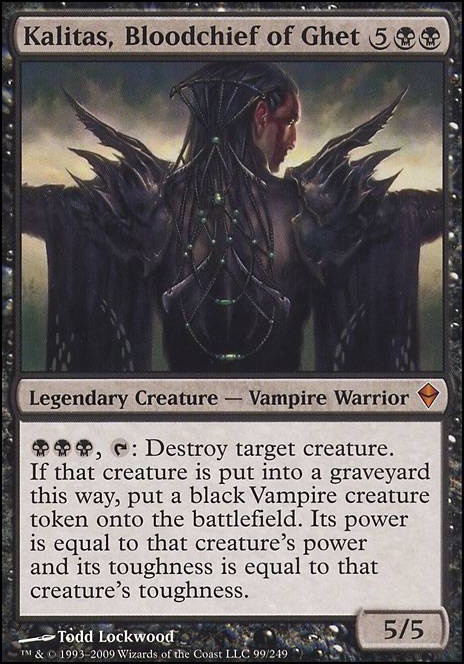 Favorite pet cards (each color and a land)?

I love talking about the game and helping people build. If you need any help message me on the wall and I'll be glad to help

I've seen some cool Emry, Lurker of the Loch builds even on a budget.

You dont see Muzzio, Visionary Architect much at all but he has a powerful effect on him. Could be fun.

If you want to stay fresh you could build a Thassa, Deep-Dwelling ETB LTB deck

I dont know how you are gonna feel about this suggestion. Glasses of Urza, this is sneaky good. A strong political tool. That doubles as a Telepathy. Looking at key player hands before you cast powerful spells or before you execute a combo to see if it will work is huge. Using it politically by telling other players at the table "hey this player has Torment of Hailfire in their hand, careful" will help you stay alive longer by making other players aware of a threat they my not have seen coming.

Another great card I would suggest is Imp's Mischief, this cards amazing. I've changed the target of counter spells back to them selves so many times. They never see it coming. Also Imp's Mischief stops counter spells that say they can't be counted basically by giving it an illegal target, itself. Its beautiful.

Now some would say that Telepathy is better than Glasses of Urza but I digress. I think it's better. Not only that but its colorless. Giving blueless players the power of blue and sometimes black.

dingusdingo normally I dont read any message that long but you kept up with every sentence with great points. I couldn't stop reading it. I agree on everything you said. However I like the occasional edh banning (even if it whimsical) . Gives a lil shake up in the format. A banning is nessasary at this time and it's not Flash... ItsProtean Hulk. Banning Protean Hulk fixes the problem from both competition and casual cmdr.

When it was banned no one missed it. So ban it again.

Excuse me Professor Gleeock (my hand rises), are with being graded on these. Because this feels like a written test.

The deputy loses to if the sheriff dies.

This is the version I use. I went to staples and printed these out and sleeved them up. 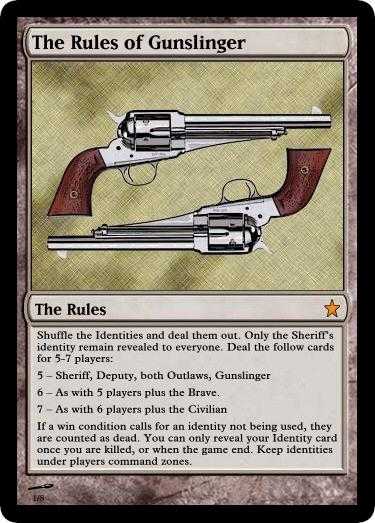 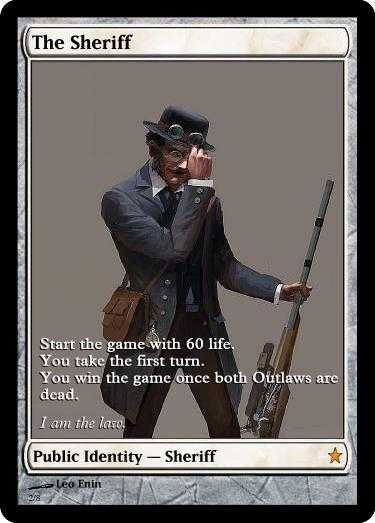 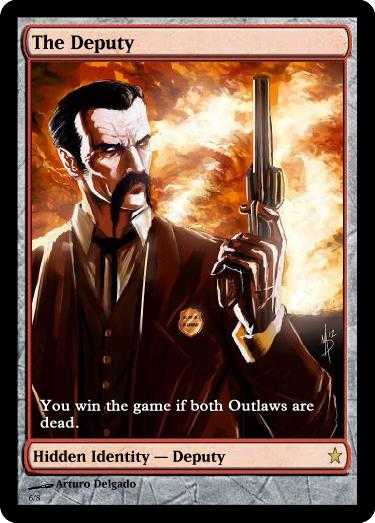 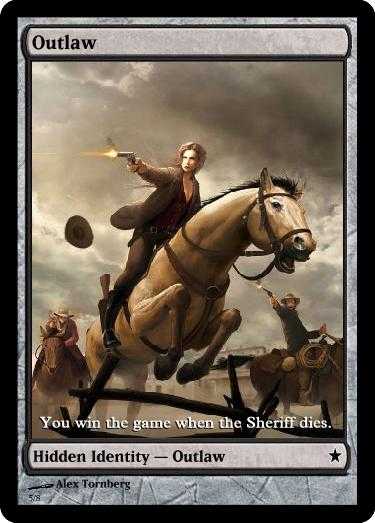 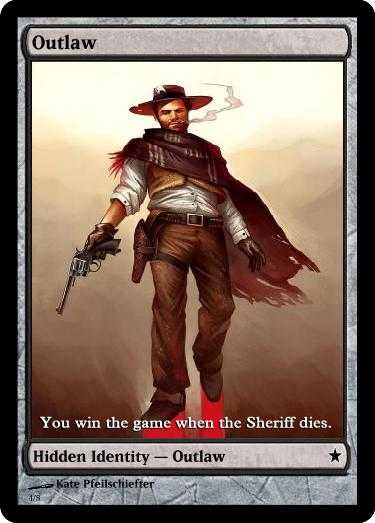 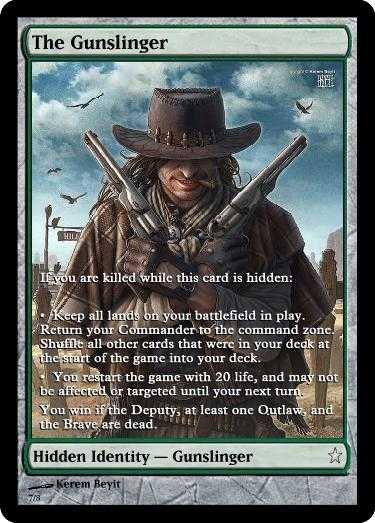 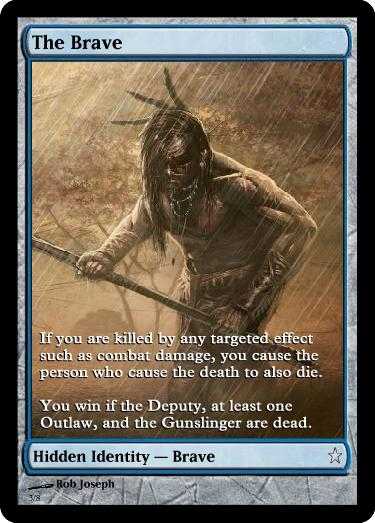 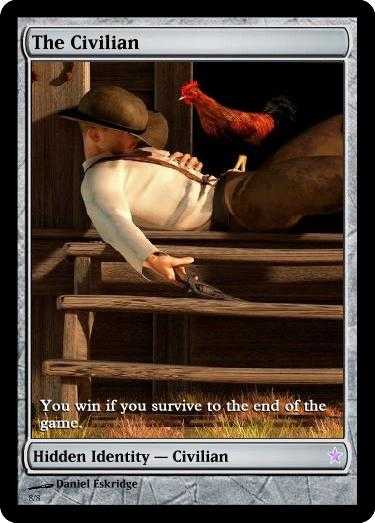 So I recently came to a conclusion that 3 player edh is it's own format.

I know edh is a format where you can play with as many players as you want but for the most part when people think edh they think 4 players.

Theres also 4 player two headed giant edh, and that's fun but not the same as edh. But some times when your inviting people to play magic you invite lots of people and sometimes those people dont show up so you invite more than you would need for a 4 player game of edh. That leads to games of edh with 5 players or more. But for some reason almost every time a 5 player edh game is started it turns into a variant of edh with a set of rules making it something else. Like you can only attack the person to your right or left. Or your allies are next to you. Or secret partners. Or my favorite (I dont know the name of this) there is a deputy, 2 outlaws, etc. Etc. And so on and so forth. These are all fun and these are games I sometimes prefer over regular 5 player free for all edh. And 6 player edh always turns into emperor. A game that is very unique to cmdr.

All of this brings me back to 3 player edh. It was a couple days ago when I realized that maybe aggro decks do have a place in edh. Boros, mono white, mardu, and sometimes red all struggle to win in 4 player edh because of the game going for so many more turns than an aggro deck would prefer. In addition trying to knock out 3 or more opponents with aggro is tough. Especially if you dont run blue or black. So 3 player edh is where these aggro decks shine. Only having to knock out 2 players is more feasible then 3 or more. 3 player edh allows for shorter games too. 3 player edh almost always becomes 2v1. And that fun too. Where as 4 player edh can be 3v1 and the threat can be delt with rather easily. Sometimes. The more people you add to a multiplayer game the more the game becomes balanced. The aggro strategy begans to fail. And combat based decks also falter. And the game becomes unbalanced for aggro decks and combat based decks.

I have one aggro deck (its boros) that I've been playing for 6 yrs. I've lost so many games with it, to either a well timed board wipe or I ran out of cards. However when I play it in a 3 player edh I win 60% of the time. Making 3 player edh the aggro format.

4 player edh is classic edh as we know it. 5 player edh is not serious edh. However I bet cEDH would do better in a 5 player pod. But that's a different discussion.

Well that's my thoughts as of recently. And I just think that if you are an aggro player. Save your aggro deck for the smaller games.

Happy V day everyone and have a great day.

I think the one spell for turn is necessary for this deck. Simply because you'll need to keep 2 cards and 4 mana every turn.

Ok so how do we win or is this a trolling deck.