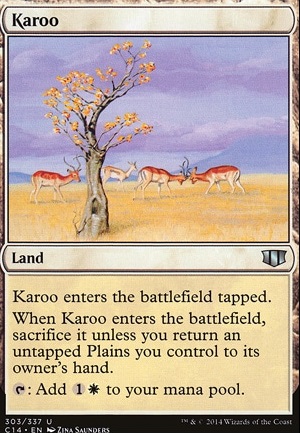 When Karoo enters the battlefield, sacrifice it unless you return an untapped Plains you control to its owner's hand.

Karoo occurrence in decks from the last year

Nahiri the Magpie
by Jah_Reggaeman

I never understood why so many people build Karametra as an enchantress deck. Her strength is clearly Creatures and Landfall! So I'm glad you are running Courser of Kruphix , Lotus Cobra , Emeria Shepherd , Emeria Angel , Rampaging Baloths , Admonition Angel , Tireless Tracker , and Avenger of Zendikar .

But in a deck that takes so much advantage of landfall, why only 1 fetchland? If you added more fetchlands, and then Azusa, Lost but Seeking , Ramunap Excavator . . . suddenly your Lotus Cobra is getting you 6 mana per turn completely for free, Rampaging Baloths is dropping 6 beast tokens per turn completely for free. Plus the extras you'll get for playing creatures and triggering Karametra.

Obviously fetchlands plus Karametra/Creatures triggers will run you out of basics to fetch. But when that happens you should be so far ahead that you can find a wincon.
If you put in Quirion Ranger , Scryb Ranger , Jungle Basin , and Karoo , and you don't even need lands in your deck to keep getting the land drop triggers.

If you wanted even more land drops you could of course run Wayward Swordtooth , Oracle of Mul Daya , Llanowar Scout , Sakura-Tribe Scout , Walking Atlas , probably others I can't think of off the top of my head.

More ways to take advantage of so much landfall: Retreat to Kazandu , Grazing Gladehart , Oran-Rief Hydra , Retreat to Emeria , Stone-Seeder Hierophant (toss in a Wild Growth , Utopia Sprawl , or Overgrowth and watch what Stoneseeder can do in this deck!)

triproberts12 on Temple of the False God â¦

I've seen this card in a lot of EDH decks under the "Help" section. It makes me angry that Wizards keeps putting this trap into precons, so I'm going to lay out why Temple of the False God is bad. Ask yourself these questions:

Do I want a 4-mana rock in this deck?

Am I already running Thran Dynamo ?

Would I run a second Dynamo?

Does my deck have exactly zero Karoo lands?

Am I playing less than 3 colors?

Am I not playing green, with the exception of Azusa, Lost but Seeking ?

Does a major part of my game plan involve getting out a 6-drop ahead of curve?

Do I have ways to draw out of an opening hand with 2 lands and a Temple?

Am I okay being stuck on 4 lands for a turn?

Is my deck redundant enough that I can afford to regularly waste a mulligan?

Is what I am doing in the first two turns of the game important enough that I wouldn't be happier to see 2-3 lands and a Fractured Powerstone over Temple in my opening hand?

If you answered "no" to any of these questions, DUMP THAT FLAMING GARBAGE RIGHT NOW.