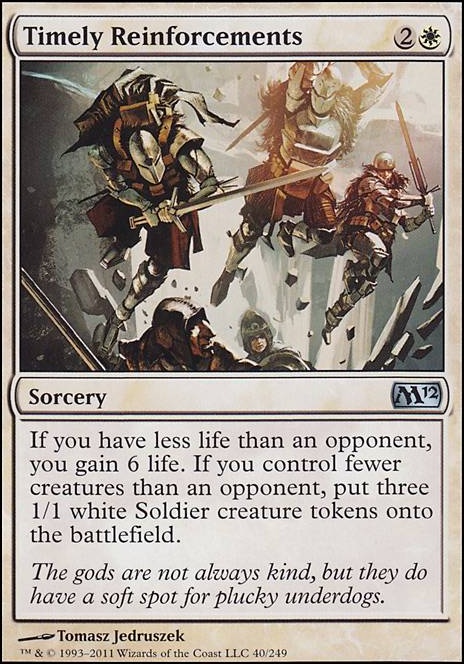 Timely Reinforcements occurrence in decks from the last year 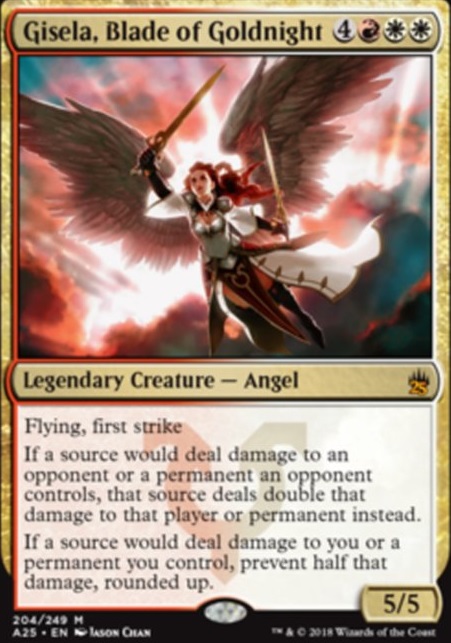 Have you considered Outlaws' Merriment or Timely Reinforcements ?

Outlaws' Merriment works in a similar fashion to Assemble the Legion , but is much faster and works better with Ogre Battledriver

Timely Reinforcements is arguably better than Raise the Alarm and is generally better against faster decks.

I think most of the tinkering is now in the sideboard- and I reccomend not 'picking a sideboard' until you have seen the metagame. Don't spend 'up' to your budget, keep the rest in reserve until you've seen what the meta looks like.

If you keep losing to Grislebrand combo, you can pick specific hate for that. If burn is a problem, or affinity a problem, similarly. It usually ends up with key cards split between side and main, another couple of Selfless Spirit as a wrath answer, for example. For now just put whatever you already have in there and don't worry too hard, then update as you play.

Notable sideboard options for spirits are Ghost-Lit Redeemer , Spirit of the Labyrinth & Windborn Muse , but honestly non-tribal options should be your go-to. Timely Reinforcements is still a workhorse against burn if you don't care about soldiers for example.

So there are a couple different ways you could go here. Delver of Secrets  Flip is a good card, but tends to go onto more proactive shells. If you want to go the Delver route, you could make it more tempo oriented with Young Pyromancer and a Stoneforge Mystic shell. Otherwise, you could go for a more control shell and drop the Delvers and the Gearhulks and slot in Snapcaster Mage and Vendilion Clique and rely on your instants and sorceries and planeswalkers for the win. If you go this route, you'll want to put in Celestial Colonnade s probably. Now for some additional suggestions:

Wall of Omens is okay in the control build, it provides a decent blocker and gives you a card.

Cards that I would cut from mainboard and sideboard are:

Lava Coil at 2 mana and sorcery, this removal is too slow and doesn't hit enough of the metagame to warrant its speed. I'd consider replacing with the Paths

Deafening Clarion You don't have enough creatures for the second part to be relevant and if you're only playing it for the first part, Anger of the Gods would be better.

Serum Visions This one is a tough cut, but frankly if you're playing control you want as many of your plays to be instant speed as possible, just so you have the flexibility to deal with your opponent's threats as they come.

Cards I'd move to the sideboard:

Hindering Light now this one comes with the stipulation that you remove the Thing in the Ice  Flips. Basically, play with thing in the ice and see how good it is, and if you find it isn't proactive enough (which is why I cut them from my deck) get rid of them and move the hindering lights to the sideboard.

Iâve always been enamored with just how cleanly andcompliment each other, so here goes.

1. Cryptic Command - This card is a veritable Swiss Army knife for a control player. I think thereâs maybe two matchups I donât like it in in Modern, and it just feels so incredible to resolve.

2. Sphinx's Revelation - while admittedly this card isnât as playable as it once was, I still love it because of how clean it is as a design. Simplicity is often a strength, as players during RTR Standard can attest.

3. Timely Reinforcements - Although itâs the dream of every control player to be able hold up removal/counters every turn and never have to tap out again, sometimes you canât find the board wipe you need. This card might be the single best flavor win in Magic. Any time you resolve Timely Reinforcements , it feels like the most pivotal play of the game and immediately throws off your opponentâs plan.

4. Think Twice - I have an unhealthy obsession with drawing cards. It might be my single favorite thing to do in Magic, besides possibly winning. Think Twice is a Wafo-Tapa innovation thatâs great for the Draw-Go player, and it provides convenient card advantage whenever you need it.

5. Path to Exile - Okay, I know the Gideon signature spellbook has a printing of Modernâs best removal spell, but that one has gross art. Rebecca Guay is an amazing artist, and I love the subtle storytelling on her PtE variant.

6. Terminus - Board wipes are like nukes. Theyâre super powerful and effective, but very costly to manufacture. Sometimes you stumble on land as a control player and you just die with a Wrath of God rotting in your hand. Terminus is the best use of the Miracle mechanic Iâve seen because it feels miraculous to peel one off the top against Jund and just get âem.

7. Baneslayer Angel - Okay, this card isnât an instant or sorcery, but hear me out. Baneslayer Angel is my favorite card in all of Magic. I am a huge fan of Angels as a creature type in Magic, and Baneslayer Angel personifies everything that I love about them. Her art is absolutely stunning, and might be my favorite art not by Rebecca Guay, Terese Nielsen, or Seb McKinnon. She also hugely impacts the board, and often leads to a quick game over. She satisfies both the Timmy in me, as I started Magic, as well as the Spike in me, as sheâs just dazzlingly efficient for what she costs. Baneslayer Angel , to me, is the most elegant Magic card ever made.

8. Teferi, Hero of Dominaria - It was a toss-up deciding between T5feri and Jace, the Mind Sculptor

, but I decided to go with the less obvious choice. Unlike some newer planeswalkers (looking at you, Teferi, Time Raveler ), Teferi, Hero of Dominaria is just a clean design overall. All of his abilities feel so synergistic. His +1 is amazing in control, his -3 is both a removal spell and a win-con (weirdly enough), and his ultimate just feels good for control, turning all of your digging into permanent spot-removal. But, all that aside, heâs just fun to play with. T5feri has a lot of brew potential yet undiscovered, and I think heâs the coolest planeswalker besides Narset, Parter of Veils

to come out in the last five years.

Not enough lands for a deck this high up the average cmc. Slim down on the weaker angels and favor to be mostly playsets.

it also strongly feels like you're looking to fit Resplendent Angel or Angelic Accord . if you do include these Timely Reinforcements also works pretty well with these and Divine Visitation .

More morbid suggestion could be Spawning Pit as it helps combo with Bishop of Wings and Divine Visitation to gain infinite life and every 1 mana you spend gives you an angel token.

That would be Arguel's Blood Fast  Flip(Flipped) and/or the above mentioned Timely Reinforcements . Again if I wanted to be competitive, I'd drop the Avatar of Hope entirely and rum a playset of both Death's Shadow and Jace, Vryn's Prodigy  Flip. But this ismore about having fun building and maybe having playing with your friends or at your local FNM than about winning GPs.

I kinda like the look of Timely Reinforcements because Death's Shadow is kinda our only real creature we can consistently get out. Street Wraith is basically a card draw spell, Avatar of Hope is janky and difficult to get out and Jace, Vryn's Prodigy  Flip flips into a plainswalker. I don't need the lifegain so much(Another perk of Arguel's Blood Fast  Flip, get below 3 play Avatar of Hope then sac Death's Shadow ) but it could definitely come in handy in certain situations.