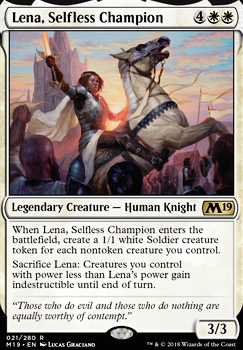 When Lena, Selfless Champion enters the battlefield, create a 1/1 white Soldier creature token for each nontoken creature you control.

Lena, Selfless Champion occurrence in decks from the last year 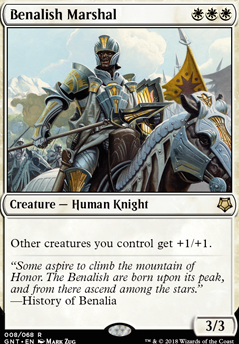 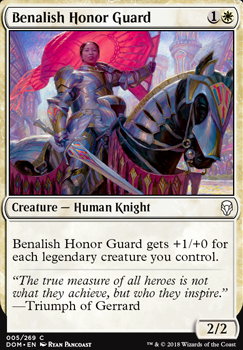 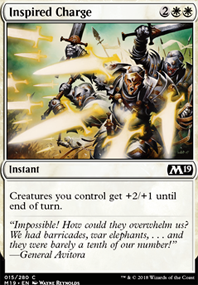 It looks like you've already got some good advice. The one thing I would advise as you adjust the deck is looking at Kemba less as a go-tall commander, and more as a go-wide commander. Harsh Mercy was a beating in my old Kemba deck. You'll also want cards like Teferi's Protection , Selfless Spirit , Rootborn Defenses , Unbreakable Formation , Lena, Selfless Champion , Make a Stand , and Brave the Elements to protect your army. Cards such as Anointed Procession , Divine Visitation , Coat of Arms , Regal Caracal , and True Conviction (works great with equipment!) to really be able to run over people.

Sworn Companions instead of Raise the Alarm could be a much better option if your going for a lifegain strategy. Ajani's Pridemate is one of your most important payoff cards if it sticks on the field for long enough as it can very easily run away with the game quickly. Having 4 instead of three could be a good idea. I might cut an Impassioned Orator for four Pridemates. You also seem to have almost no targeted removal in this deck, with all of your removal being boardwipes. Having Prison Realm , Or Conclave Tribunal in there in place of Lena, Selfless Champion to deal with pesky planeswalkers and creatures is a possible option.

Elspeth, Sun's Champion seems like such a great choice for Oathbreaker! with being able to wipe the board of fatties and pump out tokens to chump block just seems really strong for this multiplayer format...Besides suggestiong a different signature spell; i think some resistance to opponents using their own Damnation / Supreme Verdict is gonna be the biggest setback for your decks gameplan... maybe soemthing like Lena, Selfless Champion , Spirit Bonds or Ghostway / Eerie Interlude can help? love the concept +1

Touching the Sky (Roon of the Hidden Realm)

Thanks for the feedback Naetus! I think Archon of Valor's Reach would generate too much hate and it hinders me as well as my opponents. And Lena, Selfless Champion can't even protect our commander so I don't know why I would run it over over a draw engine like Prime Speaker Zegana or recursion like Greenwarden of Murasa

Beast Whisperer is a solid idea though, doesn't have an ETB but has value.