If a Zombie you control would deal combat damage to a player, instead that player puts that many cards from the top of his or her library into his or her graveyard.

Whenever a creature card is put into an opponent's graveyard from his or her library, exile that card and put a 2/2 black Zombie creature token onto the battlefield.

Undead Alchemist occurrence in decks from the last year

The Legion of The Scarab God
by Shad0wRaz0r

Sibling Align against the Horde
by beastboyrolf23 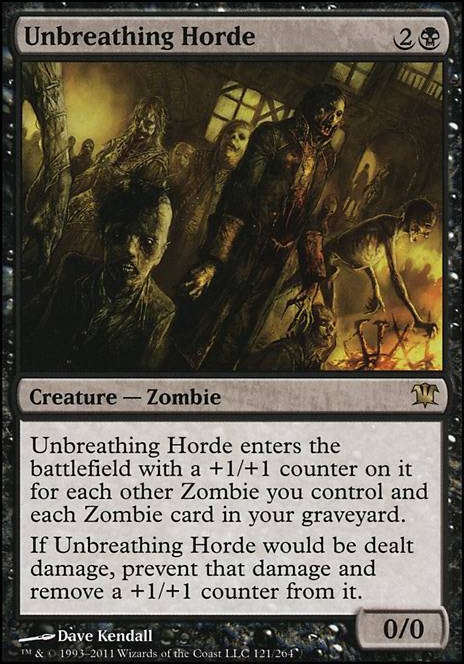 TangoWithTojo on What Are Some Of Your ...

As the title says, what are some of your favorite combos or synergies? What kind of combos have your decks produced that you had no idea even existed? Or what kind of insane combos have you seen other people pull off that were equally unexpected?

I'll give an example. A friend of mine runs a Varina, Lich Queen deck that has milling as a secondary win condition. His usual win condition is flooding the board with zombies and simply overpowering you with value. Well one game I was using my The Scorpion God deck vs his Varina, Lich Queen deck and his sons Meren of Clan Nel Toth deck. He ends up keeping an extremely greedy hand containing Altar of the Brood and Undead Alchemist . He's finally able to play those 2 cards after being mana screwed for like 10 turns straight and then proceeds to mill both of us for more than 70% of our libraries with just Undead Alchemist entering the battlefield. He ended the turn with more than 20 zombies, coming from a battlefield of literally nothing. His son and I killed him with infect the next turn because we didn't want a repeat of what just happened. But the damage he caused prevented my deck from functioning which led to my swift defeat.

Unfortunately, this doesn't work. The Scarab God does become a Zombie with Arcane Adaptation in your control, but Scarab is not doing damage with it's upkeep trigger. It's making your opponents lose life which is not damage.