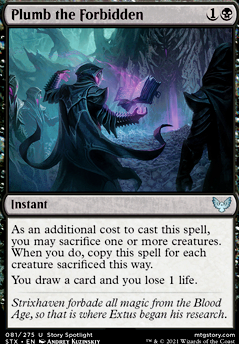 As an additional cost to cast this spell, you may sacrifice one or more creatures. When you do, copy this spell for each creature sacrificed this way.

You draw a card and you lose 1 life.

Extus Sacrifice yo Shizz
by KiraKoda91

I played some cEDH games with this yesterday. The deck worked wonderfully: I won 2 out of 3, and I should have won the 4th if it wasn't for a really dumb mistake -- I cracked Voidwalker to steal someone else's Earthcraft with my combo in hand, realized afterward that I had zero basics, and immediately died to a combo Voidwalker would have stopped. Welp.

Standard Bearer and Heroic are much better in a more casual format with lots of board wipes. CEDH doesn't have many of those, apart from Toxic Deluge (which Heroic doesn't even stop). Besides, my biggest concern in cEDH is stopping opposing combos rather than protecting my own board. I need to find ways to answer Thassa's Oracle, Ad Nauseam, and Underworld Breach.

I haven't drawn Fynn yet, but I'm optimistic. It's not hard to get 3 or 4 snakes, and then I can two-hit people to death. It's a good, solid wincon when I'm stuck under my own stax pieces.

I got to play both Trinisphere AND Contamination yesterday -- both separately AND in the same game (my poor, poor opponents). Both did wonders, and pretty much won singlehandedly. Note that Plumb the Forbidden does NOT non-bo with Trinisphere :) The copies aren't cast and are thus unaffected.

By and large, I'm very happy with the changes!

I agree with Profet93, i very excited to hear about your results with the stax pieces. Mostly Contamination =D

But what i have been going back and forth on asking is, how is Trinisphere treating you? Does it feel like too much with the low mana curve or that it non-bo's with Plumb the Forbidden. It seems crazy good here and a great extra piece of stax with Collector Ouphe and Culling Ritual to slow down greedy opponents

Housegheist I'll consider Plumb the Forbidden, because I do need more draw power in here. I've actually been thinking about adding Life's Legacy for the same reason, and in a lot of ways I like that even better for this deck than Plumb Forb. Either way, the problem then becomes what to cut from the list to fit either of them.

Which is why I would turn down Bastion of Remembrance. In any other Mazirek deck, that card (and many others you don't see on this list) would be an automatic include. Here, however, I need the space to smash in as many Squirrel spells as possible. So that, Viscera Seer, Zulaport Cutthroat and/or Blood Artist, etc. etc. etc., did not make the cut.

Thanks for checking in!

What about Plumb the Forbidden? You can mass sac an amount of small creatures and draw a b*ttload of card of it? And while sacing all these creatures, Bastion of Remembrance could drain a lot of life (and brings it's own fodder to the table).

Oh, and running some fetches could pump your team, too. Either the unaffordable ones (like e.g.Verdant Catacombs or the more budget-friendly ones, e.g. Fabled Passage)

Lokotor what is your opinion on these cards being added to Marchesa ? Kalain, Reclusive Painter, Fain, the Broker, Plumb the Forbidden and Ragavan, Nimble Pilferer ?

Lathrilboy - Went over it today and added Circle of Dreams Druid Allosaurus Shepherd Plumb the Forbidden and Yavimaya, Cradle of Growth.

Thanks for the suggestions killer_eye! Yeah Scute Swarm has definitely been great.

I used to run a lot of those big graveyard-based cards like Boneyard Wurm , Splinterfright , Spider Spawning but eventually cut most of them for reasons similar to the Worm Harvest one. Boneyard Mycodrax was one of those but I totally forgot that it also has a graveyard ability, so it could be interesting. Bonehoard is a like a reverse Nighthowler , definitely usuable.

Plumb the Forbidden is pretty good too.