When Venser, Shaper Savant enters the battlefield, return target spell or permanent to its owner's hand. 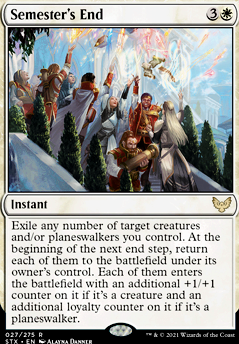 Hey Asshole Turn On Your God Damn Blinkers
by BattleDomeGuy

Yarok and friends
by Sjfaissal98

legendofa on Planeswalkers when someone knocks on â¦

Wendithewendigo That's Venser, one of the main good guys of the Time Spiral and Scars of Mirrodin blocks and original source of Karn's Planeswalker spark. He's pretty much permanently dead.

Hey, you're welcome. Venser, Shaper Savant is powerful with Yarok when you have infinite mana because then he can be a potential win condition by bouncing all your opponents permanents (their lands) as well as since he has flash repeatable protection from counterspells or removal that tries to stop the combo. Venser is not a true win condition in that you automatically win the game instead with Yarok he's a lock that doesn't allow your opponents to have any permanents.

Venser + Peregrine Drake + Yarok is not as mana efficient as Shrieking + Cloud + Yarok, but it's less cards (reduces three steps) to have a win condition with Yarok because of Venser. Shrieking + Cloud is only infinite mana; you realistically need three more cards to combo. First, a creature who draws when it ETB or another effect that draws when you cast or a creature ETB or a mana sink to draw. Then, have to draw the win condition to use infinite mana. Finally, you want some protection for the combo thus you want to draw some counterspells. With Venser you can cut out all three of these steps.

Thanks for all your support everyone! Its nice to be top-ranked! Quick gameplay update. Both my recent additions, Pyre of Heroes and good old Counterspell did work at game night last night. Pyre turned what was a tough game into a win when I was able to sacrifice Venser, Shaper Savant to tutor out Bloodline Necromancer after drawing into Ashnod's Altar . I'll keep testing, but my intuition is that these were great additions.