Whenever you cast an instant or sorcery spell, Electrostatic Field deals 1 damage to each opponent. 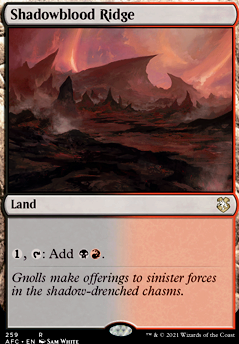 Torbran, run for your life!! (dragon's approach!)
by SilencedDax

Hereâs a few possibilities for you to think about:

Looking good! After a few playtests, it's clear just how quickly you can assemble a small but versatile army. If I may, I have a few questions and/or recommendations for the deck. I'll start with the overarching notes.

First: why isn't there more red? It seems that you've bulked up on white and blue despite having all this red mana at your disposal. I can certainly understand the appeal when it comes to cards like Jaya's Immolating Inferno or Finale of Glory , but unless this is a dedicated combo deck bent on tutoring out a similar win con (may I suggest Comet Storm ?), I have to wonder how you're planning on making it work. If you aren't as dedicated to that, I would look into ways to turn red (or colorless!) noncreature spells into cantrips. Jori En, Ruin Diver comes to mind. While you're at it, Birgi, God of Storytelling Â Flip and Runaway Steam-Kin , if not price-prohibitive, would be decent additions.

Second, it would seem you need a few more dedicated spirit token generators. Spirits can get expensive, but it is certainly possible to pick out Court of Grace , Geist-Honored Monk , and Promise of Bunrei .

I realize those are not red cards. Have you considered Electrostatic Field , Gelectrode , or Thermo-Alchemist ? Maybe take a look at modern Arclight Phoenix decks? I would also look up boros anthem effects, which are probably better than mono-white ones. Nobilis of War is free after 5 spirits.

Overall, I think being clear about how tall and how wide you want this deck to be will help streamline its consistency. Kykar has a lot going on; make the most of him (or her)!

This is awesome! :D

I love burn too and one of my favorite pieces has been Electrostatic Field (since it can deal damage the moment it hits the field while also being an amazing blocker against any creature-based aggro - also it survives bolt!) and Satyr Firedancer (I more use it in the sideboard since it's not perfect for every match up but when I do use it, that extra value to your precious burn damage can be just amazing).

These are just some of my favorite pieces I've found but feel free to ignore them; your deck looks really fun without them too :)