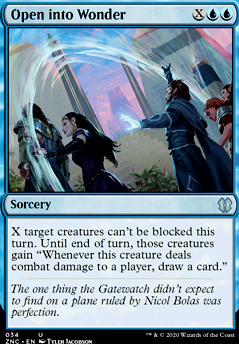 X target creatures can't be blocked this turn. Until end of turn, those creatures gain "Whenever this creature deals combat damage to a player, draw a card." 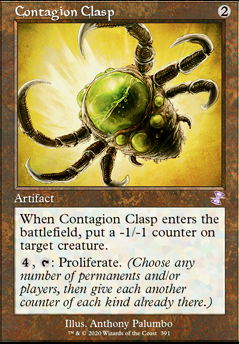 theindigoeffect on Are there any other cards â¦

I have a Marchesa, the Black Rose deck, and being able to cast Open Into Wonder, subsequently put counters on my creatures, and draw cards is perfect for my deck. Are there any other cards that can imitate that effect? I know Bident of Thassa functions similarly, but I don't have enough fliers to make use of a card like that.

theindigoeffect on How do you create card-draw â¦

I love the goad mechanic, but after you throw in the goad cards and evasive creatures, there just isn't much room left for an aristoctats sub-theme to generate card-draw. If Karazikar, the Eye Tyrant was an Izzet commander, I could use cards like Bident of Thassa or Open Into Wonder to generate card-draw with my evasive creatures. In Rakdos, I can't think of any options for card-draw synergy, and I don't want Karazikar to be my only source for card-draw. Any suggestions?

Nice deck! How about Levitation and Archetype of Imagination to give your team some evasion? Open Into Wonder could be nice too

Great list! Mana Bloom is genius! Don't know how I missed that one in my own Zaxara build. I really like Wilderness Reclamation too.

Cover of Darkness and Primal Rage might add some evasion. Open Into Wonder is also interesting.