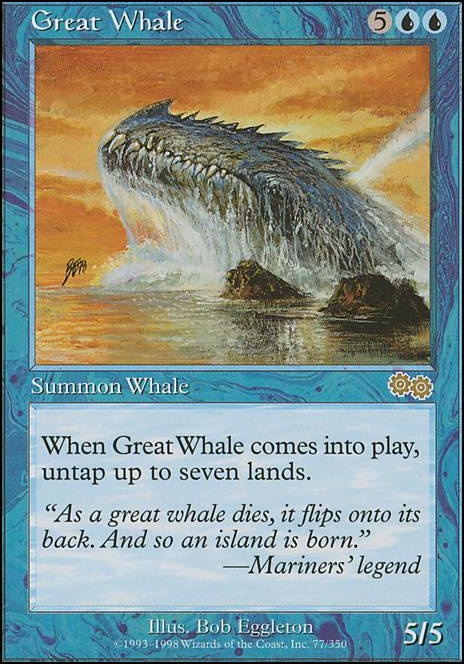 When Great Whale enters the battlefield, untap up to seven lands.

Great Whale occurrence in decks from the last year

Vanish in the Night
by Tinnuki 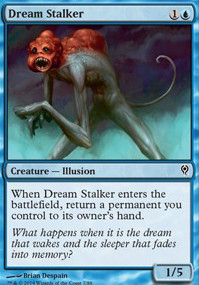 enpc on Help With Tazri

I_Want_To_PlayAllTheDecks: I had been considering putting together a Tazri deck for a while prior to this thread (I have played her in the past but have since pulled the deck apart). I have been looking into a better balanced list here: Tazri which is far from done, but might give you some ideas. I am running Palinchron which allows for some additional combo lines above Great Whale (since it combos with Bramble Sovereign ) however if Palinchron is outside your budget then that's understandable.

enpc on Help With Tazri

The problem the food chain Tazri list is that the entire deck is devoted to the food chain line. The deck also heavily relies on the forbiddent tutors (e.g. Tainted Pact ) which got expensive as hell thanks to Thassa's Oracle .

One good budget alternative is to use Deadeye Navigator + Great Whale or Peregrine Drake with Tazri and Kalastria Healer as the same infinite line that the FCT decks do. The benefit of this line however is that you can still go ally heavy in the build and deadeye has good synery with the list. You can also use Eldrazi Displacer or Eternal Witness + Ghostly Flicker (which are both good cards in ally decks anyway) as redundancy on deadeye.

Walking Ballista is your best finisher here. Especially if you run Ancestral Statue as the above poster recommended. If you add these 2 cards, also add Weird Harvest to tutor the combo up. Shrieking Drake is another option that's a bit fairer than Statue if you're avoiding infinite combos.

Cloud of Faeries, Peregrine Drake, Stadium Vendors, Great Whale, and Palinchron are worth their weight in gold in Animar.

Incubation Druid + Vigean Graftmage is cool. I feel like I'd seen it before but forgot it exists. I'd suggest outlets like Shaman of the Great Hunt or Thrasios, Triton Hero to dump all that mana once you have it

I run Deadeye Navigator and Palinchron in my Omnath, Locus of the Roil deck. Deadeye is cool with Omnath to use his first ability and zap away problem creatures or chew away opponent's life totals. With Palinchron (or Great Whale, or Peregrine Drake) this is now infinite mana and infinite damage! Mwahaha

Anywho, please check out my omnath deck and tell me what you think! I've been messing with it since he was first spoiled, but it's still a work in progress (as is any deck!). Have fun!