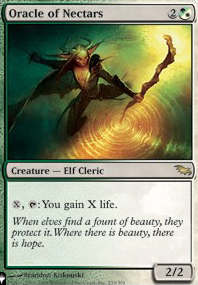 [Prototype] Karlov of the Ghost Council
by Phobeo7

In My Imagined Oblivion (Teysa, Orzhov Scion)
by squadcarxmar

Daxos, Blessed by the Sun Discussion

A Deck for Lurrus

If you are in an artifact-heavy playgroup, I'd recommend Kataki, War's Wage! He's put in a lot of good work for me. Have you considered Auriok Champion to go along with Daxos, Blessed by the Sun, Soul Warden, and Soul's Attendant?

Commander_Olim I did consider it at first, but I think Daxos, Blessed by the Sun simply works better with the lifegain theme.

It's also a little funny to me that everybody expects enchantments or something seeing the commander, but boom - Fox tribal.