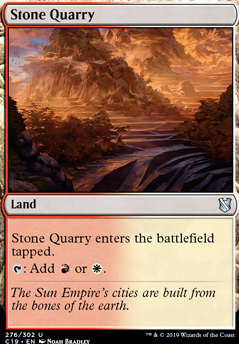 Stone Quarry occurrence in decks from the last year

I would run 2 copies each of Tajic, Legion's Edge and Aurelia, Exemplar of Justice . They tend to die in combat, so having multiple isn't bad, and you are always better off drawing them.

Rotation is coming so there will be changes I'm sure. I'd start here.

You have so many multicolored critters that Hero of Precinct One would be a big contributor to your deck.

I would take out some land. That's a lot of basic and some of the special lands are really expensive. I would recommend as alternatives Temple of the False God , Boros Garrison Boros Guildgate Stone Quarry Command Tower