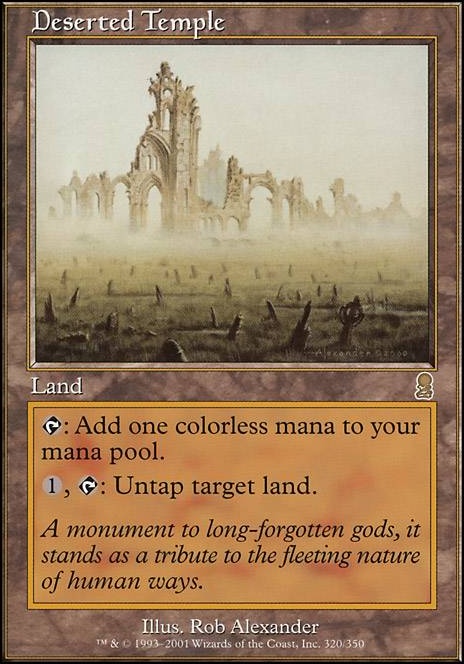 Deserted Temple occurrence in decks from the last year

Daxos the Returned EDH
by ventergh

Kozilek the Great Distortion
by baloski

Yawgmoth's Will - Recursion and powerful

Helm of Obedience - Can be used as leyline for another infinite combo. Not great on it's own but worth considering

Rings can also be used with Magus and your commander for additional utility. With fetches, it can help ramp you or blow up their lands with strip mine. Draw more cards with top, draw more cards with necro in exchange for mana instead of life, and much more....

I have A LOT of suggestions and questions for this deck. But I'll start off with a few since it's a bit late...

Would love to hear your comments on each suggestion. If you want to take a look, here's my Deck

Sumradagnoth, between Gaea's Cradle, Itlimoc, Cradle of the Sun, and basics enchanted with Wild Growth and/or Utopia Sprawl, running Deserted Temple is a great idea! I need to go pick one up!

VeggiesaurusRex Granny puts a heavy beatdown on my pod :D

Currently have Hurricane in and Harmonize out
Also added Lotus Petal and Deserted Temple, and pulled a forest and Darksteel Citadel

Profet93. Thank you for your advice!

You're right about how I started this build. I definitely googled a bunch of mono-black combos and smashed them into this deck. Feedback like yours is exactly what I was hoping for.

That said..I've cut out a few combo's and added a few of your recommendations.

Liliana's Triumph and Victim of Night went in.

Deserted Temple and Volrath's Stronghold will both go in once I can get them.

Imp's Mischief looks awesome and I cant wait to play it!

Rings of Brighthearth - I recently purchased one of these, but it has yet to arrive, I'll definitely add it.

Will play around with Panharmonicon.

Thanks again for your input.

It's been surprisingly consistent so far, to the point that I took out most of the other cheat-stuff-into-play effects.

The main way to turbo-ramp is tutoring out Lotus Field+ Deserted Temple and land enchantments like Wild Growth. I can usually ramp into Golos, Tireless Pilgrim turn 4, and tutor a combination like that onto the field by turn 6 or so; those 3 cards give 7 Mana on their own, and I can start activating my commander.