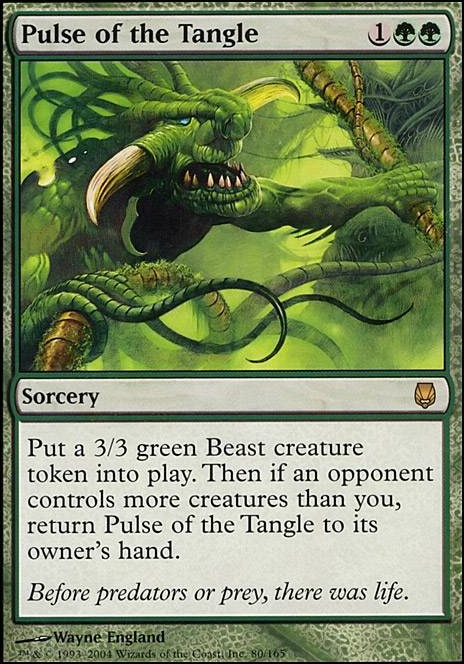 Put a 3/3 green Beast creature token into play. Then if an opponent controls more creatures than you, return Pulse of the Tangle to its owner's hand.

My name is Uril
by Falkenstein 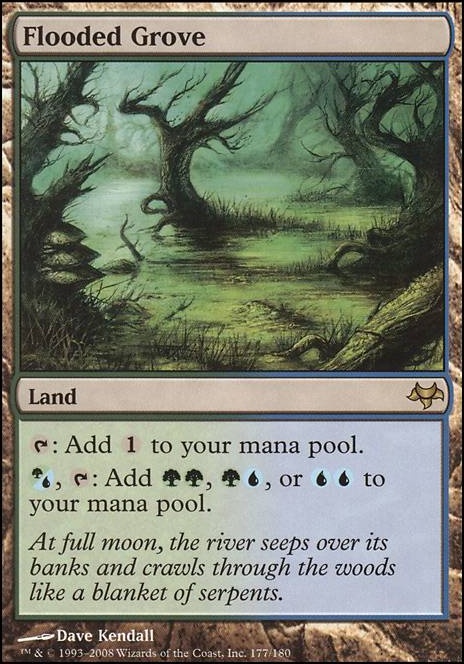 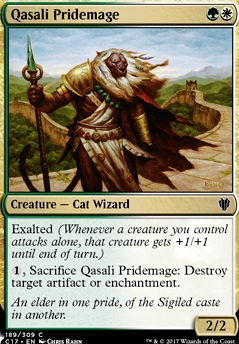 Everybody Fuckin' (Trostani Budget)
by ultitaria

Pulse of the Tangle Discussion

Beasts on a Budget GRW

I'd consider Evolving Wilds/Terramorphic Expanse over Blossoming Sands, as it fixes all colours and dodges Blood Moon if you crack them before turn 3. Naya Panorama is also interesting, but less amazing in such a colour-intensive deck. Brushland, Karplusan Forest, Battlefield Forge exist, but only one has been printed recently enough to smoothly slot into budget lists.

Radiant Destiny- compared to Always Watching its more expensive beacause its in standard, while more difficult to turn on, so I'd consider a switch. Beastmaster Ascension is on-theme and slightly cheaper, and my personal preference. Mayael's Aria can also be fun.

Beast Within is on-theme premium removal.

Pulse of the Tangle is a good card advantage tool in more midrange lists featuring Thragtusk and Obstinate Baloth maindeck.

Good luck, and I hope that you get that streamlined deck of your dreams. Its always good to see more weird tribal lists around.

Give this a try Copycat Craziness copy- it still reliably drops creatures on the board in that repeating way, it just has cards to stop you dying quickly. It should hold up better in most modern metagames- surviving to set up that production line is the thing. Pulse of the Tangle does a lot to keep creatures on the board and reliably gets a t3 token with more later.

This deck I was less pleased with when comparing directly with The Poachers. Here's why:

Your description for the deck refers to Africa, like the whole continent. Yet only 16 creatures showed up to the party to band together. I'd really like to see this as a mono-green beast token deck with Garruk Wildspeaker or Soul of Zendikar as the feature card.

Suggestions if you go that route to get you started: Beast Within, Pulse of the Tangle, Thragtusk, Vitality Charm, Ant Queen, Broodhatch Nantuko, Hornet Nest, Keeper of the Beasts, Trial of Strength, Words of Wilding.

I only playtested the decks once but this one feels much stronger than the other one. The Poachers should be answers from hunters and land from the guides. But there is few answers to three copies of Scaled Behemoth unless the opponent has resolved a one-of Glaring Spotlight.

This all said, a few large creatures against a group of hunters would be cool to but then The Poacherswill have to be strengthened.

This deck is dope. I don't have any super-powerful suggestions but I can think of a couple fun ones that might have a place in your meta, depending on what it is like.

If you're the only one really running a tribal theme (beasts/elves from the looks of things), you might be able to make use of Harsh Mercy, if not to watch your opponents squirm as they decide what to give-up, it can at least make for some fun politics as people declare creature-types of their allies to try and save them. It's a bit weak in that it obviously won't hit the best stuff on the table most of the time, but it's super cheap at only and makes for fun diplomacy.

If you find yourself regularly outnumbered, you could try out Pulse of the Tangle, as it can get more beasts out onto the battlefield for your other synergies while potentially allowing for some great card-mileage.

If you've ever been at the receiving end of a Blasphemous Act, it could be fun to include a Tephraderm into your creature roster. Fun as it is on its own, if you're feeling particularly devilish you could try out a fun little combo using Tephraderm, Darksteel Plate, Druid's Call, and a 'ping' granting ability like Viridian Longbow or Arcane Teachings. Just make sure you have a sac outlet to break the infinite loop! Enjoy your unending tide of squirrels.

Absolutely LOVE the list you've got going on here!!! This is pretty much the types of cards i try to include at least 1-4 of in every (commander) deck i build....sadly i have less than a dozen of the cards you've listed in my current 8 decks, even though i've probably owned or played with 60% of them.

I primarily play casual commander and have for the last yr and a half, though i've played a lot of different variants on and off since i 1st started back in the era of Legends. As an on again off again player idk what's been spotlighted and what's slipped under the radar on various years as i wasn't paying attention to the radar.

I do have a few that aren't listed here, though with a broken radar idk if they qualify for this list but anyways;

I'm sure a few of these won't make the list, and i imagine a few might...and i apologize for the lil' wall o' text.

Chatter of the Squirrel, Gather the Townsfolk, Gelatinous Genesis, Hooded Hydra, Launch the Fleet, Not Forgotten, Pulse of the Tangle, Raise the Alarm, Rest in Peace, Rootborn Defenses, Rousing of Souls, Selesnya Evangel, Slime Molding, Spirit Bonds, Words of Wilding, and Wurmcalling. I'd also recommend the storage land if you choose to add anymore X spells to your deck. That card would just help so much as the game drags on. I'd also include Path to Exile and Swords to Plowshares for those pesky big creatures that are hard to deal with. But, those cards mentioned above are just some cards for you to go through and see if you like any of them.They are also all cheap cards as well, so that will fit well for your budget. I think the most expensive card I mentioned is Path, which is around $10. The next one is Rest in Peace at a little under $5.