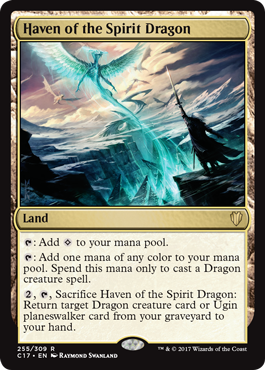 : Add one mana of any color to your mana pool. Spend this mana only to cast a Dragon creature spell.

, , Sacrifice Haven of the Spirit Dragon: Return target Dragon creature card or Ugin planeswalker card from your graveyard to your hand. 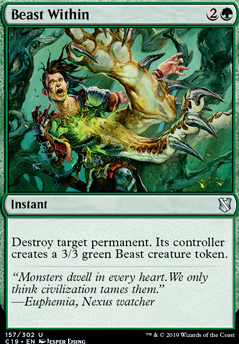 Mina and Denn, Wild As Dragons
by Nillstan

Haven of the Spirit Dragon Discussion

For starters, 33 lands is low. I like to start with 36 land, 8 ramp/rocks and go from there increasing or lowering as needed. To speed it up after increasing it would be to eliminate as many tap lands/rocks as possible. Ditch the vivids for basics, City of Brass , Haven of the Spirit Dragon , and Mana Confluence are multicolor lands that enter untapped that can replace some tap lands... sure they pain, and one's limited to dragons but no pain no gain. Other than that just try to balance it for your colors... for instance if you are RG heavy, then you'd want to keep the Naya, Jund, and Temur tri lands above the others.

As for the dragons they seem all over the place. I found an interesting deck page for scion combos you could check out if you want to go that route. Hasn't been update in 3yrs but it's a start.

Ur dragon is probably best to focus on combat synergies (when dragon attacks, extra combats, etc, and tokens (i.e. Utvara HellKite). You could try a control route I suppose but idk, honestly I've been trying to piece it together for awhile but still seems weird and all over with what's in the list. I think there are a few dragons you could do without: Chromium, Niv, and Okagachi. I feel they require more dedication than you can afford for a tribal deck. I'm on the fence about a bunch: DL Ojutai could be replaced with some good card draw, Dromoka jr and Vorosh I'm not sure counters are necessary with tribal bluffs and all, and Karthus because he can be copied and well... its bad times.

Sorry it took so long, tried looking at it at work but didn't give me enough time to really focus on it. Hopefully it helps some at least.

Hey, this is absolutely amazing, and I am so jealous I didn't think of this sooner. I love tribal decks, and this would be the ultimate one. You just use all the best cards from all the best tribals, it's that simple. Also, not saying you have to, but naming wizard for morophon is clearly the best option.

Some suggestions for cards: Door of Destinies , maybe a sliver or an ally (detracts from flavor), Descendants' Path

Card draw for casting creatures (draws a lot of cards (possibly entire deck if you have judah out): Guardian Project , The Great Henge , Beast Whisperer , Primordial Sage , Zendikar Resurgent , Soul of the Harvest

I will most likely have more ideas, and will post them soon, but one of my classes is starting now.

Thank you for your feedback and it's great to hear from another Titania player! I would love to see your list. My list has become very foiled over the years, but that's just because I love the deck! To address your suggestions:

As for Food Chain , I removed the Food Chain package to lower the power level of the deck. The package is genuinely insane in the deck, but my group didn't really like to play against it. Instead, I put together a General Tazri Food Chain cEDH deck with it. I highly recommend Food Chain in Titania though. You can exile tokens for creature mana. With Command Beacon + Food Chain , you get infinite 5/3 elementals and with a land sac outlet, you can get infinite mana to cast other spells by casting Titania and bring back lands to convert the Food Chain mana into normal mana. Otherwise, if you have a Strip Mine in your graveyard, you can just cast Titania infinitely and bring back Strip Mine and kill all your opponent's lands. Food Chain is busted.

You should also consider running other lands over the tron lands and the Locus lands. Yeah, sure, they're really sweet if they're online, but you'll rarely get all of the pieces on the board if you draw them naturally. Maybe try Inventors' Fair , High Market , Phyrexia's Core , Reliquary Tower , and Haven of the Spirit Dragon .