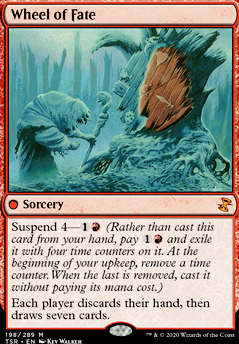 Suspend 4â *(Rather than cast this card from your hand, pay and remove it from the game with four time counters on it. At the beginning of your upkeep, remove a time counter. When the last is removed, cast it without paying its mana cost.) *

Each player discards their hand, then draws seven cards.

Awesome deck CommanderAdventures!! Thanks for sharing it!

I'm also playing The First Sliver as commander, very fun thanks to cascade and it's easiness to build an sliver board pretty fast.

You mana base is also very similar to mine! I also use triomes and shocklands, although I'm still trying to get a bit more expensive cards like your Cavern of Souls, and some of the cheapest fetchlands.

By the way, what is your experience with Mox Tantalite ? (and the same with other 0 CMC cards with suspend like Living End and Wheel of Fate ?) I only play in my deck Ancestral Vision (and it works awesome) but I still don't tried those other cards and I was seeking for someone who has done it before.

You don't seem to have a lot of ramp, might want to add some land fetchers like Nature's Lore

~ enters the battlefield with 10 Fate counters on it

During each player's upkeep, remove a Fate counter from ~. Then, if there are no fate counters on ~, the game ends in a draw.

: Add or remove a Fate counter from ~. Any player may activate this ability.

Sorry, couldn't think of a good name for this card, and Wheel of Fate was already taken.

Make an enchantment that interacts with cards in exile, but which doesn't itself exile anything.

It could fit well into a Narset, Parter of Veils deck. There's Collective Defiance which is interesting(can you escalate of a CoCo, Day's Undoing is great, Wheel of Fate is a bit tougher. As Foretold works great with Wheel and with the deck mostly capping off at three cmc. Flame Slash, Pyroclasm and all the three cmc three damage variants should be enough to tie over until mid game. Counterspells feel awkward in such a deck, but you probably have to play them one cmc counters should probably be prioritized for As Foretold and keeping things off the board early. Is Disrupting Shoal playable? What about Force of Negation? Opt and Serum Visions are no brainers, what about Sleight of Hand. Do you think Blood Moon can find its way in?

A few things: 1) I think you should up your land count a bit. Even with a lower curve like yours, you want to be able to make your land drop every turn and with only 34 lands you're going to struggle to do so. I suggest around 37. 2) You asked for card draw, so let me tell you about card draw in Boros. Seeing that the cost of your deck is pretty low, I'm guessing you don't have an unlimited budget, so I'm gonna stick to budget suggestions for card draw. If you want more equipment, try Rogue's Gloves or Infiltration Lens. If you've liked your Reforge the Soul, I hiiiiighly suggest the new Wheel of Misfortune (if you play it smart, it doubles as Wheel of Fortune AND a huge damage spell). There is also Magus of the Wheel and Wheel of Fate as other budget wheel options. If you want more cards that draw you cards by doing your thing, try out the new Wyleth, Soul of Steel or if you want to splurge a bit, Puresteel Paladin. Then there is plenty of good impulsive draw like Light Up the Stage or Ignite the Future or Outpost Siege or one of the many Chandra's. Finally, commander legends introduced a lot more sweet options to draw cards using the monarch mechanic. The different courts like Court of Ire or Court of Grace, and different creatures that get you monarch too. 3) Finally, there are a lot of really good options for interaction that are budget that you are missing. White has a lot of efficient, effective removal spells. There are a lot of good spells that protect your board. There are a lot of good board wipes in both red and white. There are also a lot of spells you play that are really mediocre that could be replaced really easily by significantly better spells, especially instants seeing you run Sunforger. 4) Sorry, one last thing. Your deck is kinda lacking a good finisher. The finishers Boros has access to typically come in the form of extra combats, double strike, and double damage, so I would look into those.