Kor Spiritdancer gets +2/+2 for each Aura attached to it.

Whenever you cast an Aura spell, you may draw a card.

A Very Disturbing Deck
by keizerbuns

IHATENAMES Great recommendations! Some of these Iâve actually picked up and Iâm currently working on cutting them into the deck such as Kor Spiritdancer, Eidolon of Countless Battles and a few others, but I hadnât thought of a couple of those! (Sage's Reverie is on my list to get, my local store just hasnât had one in and I havenât ordered it online yet). Thanks for the input!

Yeah Heliod's Pilgrim has been on my Maybeboard for quite some time now (several months at least). The thing is, in practical applications (having played literally hundreds of games with this deck now), I've found very little use for Tutoring of any kind given all of the Card Draw this deck generates.

Being able to flip Flickering Ward on and off Kor Spiritdancer just chews through the library already (even more so with more than 1 Spiritdancer in play).

I had toyed even with something like Enlightened Tutor or Idyllic Tutor, but even those I found very little actual need for as I can (pretty much) count on getting at least 1 key combo off per game most of the time. My gripe then with the the Pilgrim becomes, apart from his tutoring (which I could just duplicate with one of the white Enchantment Tutor spells) he's just a plain creature. I much prefer having targets like Aegis of the Gods or Umbra Mystic or Kor Spiritdancer for my enchantments where the creature itself offers some additional form of power and/or protection for myself, so adding in Pilgrims kind of felt like just reducing the chance of drawing one of the actual enchantments I'm after instead while feeding the Spiritdancers. Like adding an extra step to combo'ing.

Not that the Pilgrim is bad, indeed in many aura builds I can see him playing a key role, just that in a construction like I've done up here where I'm just spamming Card Draw most games, I think he's just unnecessary and too underpowered to be a valuable target himself for building up with Auras.

Either way, good luck to ya! 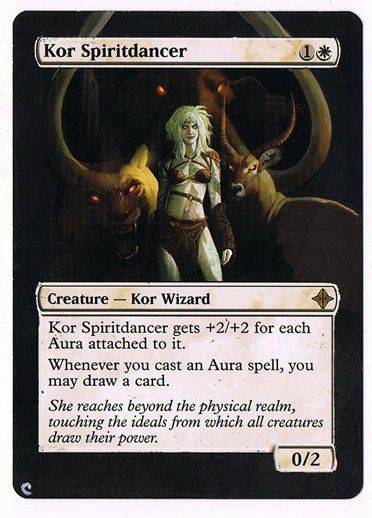