Whenever this attacks, exile the top card of each player's library, then you may cast any number of nonland cards exiled this way without paying their mana costs.

Whats yours is mine and whats mine is... mine
by zobster

Call me Fortuna
by Meap1000

For the Boros Legion!
by butt_stallion 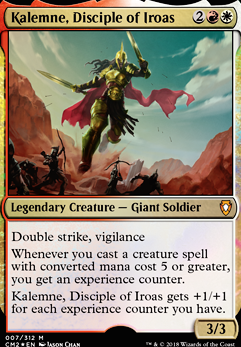 Etali, Primal Storm is definitely a card I have my eye on. I must have forgotten to add it to the sideboard but its not only legendary but also costs 6 mana. Another card I thought of is Staff of Domination . Please tell me I'm not wrong but with a forest with 2 Overgrowth or whatever else to equal 5 mana, an Arbor Elf and the staff equals infinite mana??? All I would need is one of the non tap activated abilities like heroes bane, rhonas, nylea's, or omnath to be able to either give a creature infinite power and toughness with trample or just draw the whole deck and swing for infinity. Im not sure if this actually works or if this is legal to do (one thing for sure is my friends would never play again), but if this is how it works this really shouldn't be a 3 dollar card.

Elvish Piper and/or Quicksilver Amulet are very strong in casual ramp builds running a lot of large creatures. Assuming they resolve, they also let your other creatures slip past countermagic without needing other silver bullet cards. Ruric Thar, the Unbowed is certainly a decent way to punish noncreature decks if there are enough of those around. Akroma, Angel of Fury feels almost too narrow to me but she's certainly not bad. The first creature that comes to my mind for such a slot is Etali, Primal Storm . It's relatively cheap, can cascade into other threats, and is particularly spicy in multiplayer games.

In my deck at least, Planar Portal is almost exclusively used to fetch the single copy of Primal Surge or a safety Vexing Shusher if I'm suspicious of rogue counterspells. However, I don't play against nearly as much countermagic as you seem to, so I wouldn't count on a 6-drop artifact with a game-ending activated ability resolving in the first place. Something cheaper like Eldritch Evolution or a delirium Traverse the Ulvenwald would be easier to resolve, at least in theory. Or, you could just run more copies of the cards you want to tutor so that you naturally draw them instead. Building a toolbox may allow more options but it can be less consistent than a more traditional approach. Speaking of toolbox cards, Klothys, God of Destiny falls in that category here. She's quite strong in a midrange shell but doesn't offer much that would help in ramp (unless your table is running a lot of fetchlands). The graveyard exile would mostly be valuable as tech against decks making use of their yard for shenanigans and I'd only want her in those matchups.

Hey man, love the deck! The alternate art for Moraug is sick. Here are a couple of suggestions: