When Lazav, the Multifarious enters the battlefield, surveil 1. (Look at the top card of your library. You may put it into your graveyard.)

Lazav, the Multifarious occurrence in decks from the last year I'm Everyone and No One
by Dromar39

Self Milling Makes You Go Blind
by genesiseffect 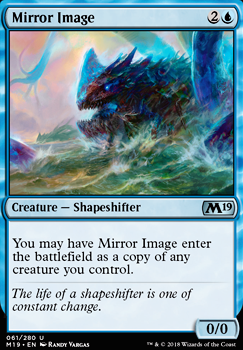 I'm Everyone and No One
by Dromar39

MIll IS STILL VALID
by Carballer2001

plakjekaas on When did you win, at â¦

Does it count if I lost in a glorious way?

I played my Rankle, Master of Pranks deck, on turn 6 I played a Gray Merchant of Asphodel that drained each opponent for 14 (I had quite a few permanents ramped out with Crypt Ghast and Nirkana Revenant on turn 3 and 4). It was a 5-player game, I extorted a bit, so I was at a comfortable 104 life. I swing in with Rankle, and put the trigger on the stack, choosing all modes. Then it happened.

The Phenax, God of Deception player used a dork to mill himself for 5, putting Tree of Perdition in the graveyard. He then activated the ability on his Lazav, the Multifarious in play to become a copy of the Tree. He tapped the Lazav to switch its toughness with my life total. Then he activated his Thousand-Year Elixir to untap it, then tapped it again with Phenax's ability, to mill me for 104. With the all-modes Rankle trigger... Still... On the stack...

I would assume you're wanting a discard theme?

Nebuchadnezzar gives you another discard ability

Lazav, the Multifarious, The Scarab God, Lazav, Dimir Mastermind, Zareth San, the Trickster all benefit from cards that are discarded.

Yeah You pretty much nailed it. I will hold a dork in my hand if I draw one later and don't NEED it. I don't run every dork but I like the added utility of having them be fodder to some tutors later. Exploration is kind of niche though. It definitely adds to devotion and isn't super useful all the time. But there are times where I can draw 6+ cards easily and roughly a third of a deck is land, so it helps a ton in that scenario. I used to run Burgeoning as well, but dropped it because it did not have that added functionality. I also replaced Sylvan Caryatid with Arcane Signet for the sake of devotion (also speed). Ideally, I don't play more than 2 ramp spells before slapping Xenagos down. If they are both dorks I just have to be careful for a few turns. After Xenagos dorks have much less chance of seeing the field.

The outlier is Selvala, Heart of the Wilds. Selvala will always see the field if drawn, as her pros far outweigh her cons.

On the subject of the elemental, I personally wouldn't run it. In my opinion it would be similar to the reason I have a Lazav, the Multifarious deck as opposed to a Lazav, Dimir Mastermind deck. Or even why I choose not to run Malignus. It doesn't sit right with me that an opponent has an amount of control over how powerful my cards are. I also think there is a balancing point between raw power and utility. That is a pretty generalized statement, but that is about where I land on it. I would not fault anyone for using it; it seems fine honestly. I would be interested to hear how it performs if you try it out.

Also, Moraug, Fury of Akoum is pretty decent so far. Each extra combat adds a ton of power, it's wild. He does nearly 100 damage by himself (with Xenagod, of course) and that is just stupid. It is worth noting that he does not have trample though, not everybody is perfect.