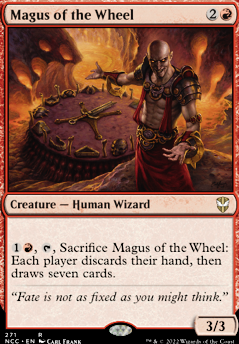 , , Sacrifice this: Each player discards their hand and draws seven cards. 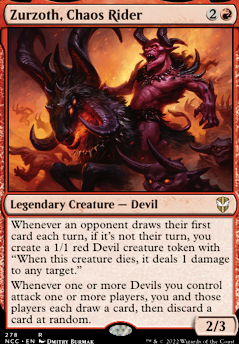 Magus of the Wheel Discussion

McToters I always appreciate comments as long as their respectful. That being said this deck doesn't have any real graveyard synergy just some recursion, it did in it's earliest form but i just bogged the deck down too much for too little advantage. The problem with Akroma's Memorial is that one there no way to protect it so it will just be blown up and two every player will be targeting you since now even a single minotaur is a huge threat, Eldrazi Monument is same thing to lesser extent it doesn't generate as much hate but it does gerenate a lot plus have to sac a creature in a non aristocrats or graveyard/recursion deck can work but you'll be losing more than you'll be gaining from the minotaurs higher CMC cost. Angel of Suffering is a debatable will playtest with her but chances are not very high, again little recursion and you can mill some of your best minotuars, but it can help thin your deck out for better draws a double edged sword for this deck but could work. As for Conspiracy i just don't think having three non tribal cards warrants using a slot for it. As for Magus of the Wheel and Wheel of Fate they are to be considered like Reforge the Soul for some hand reloading. For Illicit Shipment sure it can work really any tutor can just depends on your price range and willingness to $$$ on a piece of cardboard. Light Up the Stage is fun and will play around with it, Coat of Arms was considered but i felt like i didn't need it but Door of Destinies is too slow for my mid range aggro style for this deck

Amazing deck--man oh man have minotaurs come along way as a creature type over the years! Thoughts on utilizing Coat of Arms or Door of Destinies? There's also Akroma's Memorial, which is high CMC but great. Eldrazi Monument may help you if you are running into a problem with flying creatures. These are all things I suspect you may have thought of already.

Since Wheel of Fortune is expensive, Magus of the Wheel or Wheel of Fate could help you dump a nice chunk of cards in your graveyard if you're working with enough graveyard recursion.

Conspiracy could widen (or aid) your creature gamut since you currently have 4 non-minotaurs in your line-up. Then you could tutor for that to open up your creature choices.

There's a card in the New Capenna set that may be ballsy but could additionally work with unloading cards into your graveyard -- Angel of Suffering. Illicit Shipment could be a neat tutor for you too.

Truly--this is an AMAZING deck--so take my suggestions with a grain of salt. You know how this works better than I do and you very well may have thought of all these options yourself. Hope this is welcome feedback! Cheers

PS I'm a big fan of Faithless Looting but sometimes Light Up the Stage can be better and nets you two cards instead of breaking even.

Nice deck, thank you for sharing! :)

You might want to exchange one of your Magus of the Wheel though, as you accidentally put it into the dick twice.

I completely agree with the above user. I have my own thoughts as well, depending on budget and how you would like to improve your deck, feel free to pick and choose what you think works best for you...

War Room - Draw, desperately needed in mono red and it doesn't take a slot since its a land

Gauntlet of Power - Removal of your commander once is expensive. You do have some ramp, IMO, not enough. While this piece of ramp isn't needed, I find I usually end games with this and a draw source to constantly apply pressure

Skullclamp - Works well with your token creation, gives you some help when they destroy your commander

Wheel of Misfortune/Magus of the Wheel - You really need draw in your build IMO. This helps and isn't too expensive $

Solemn Simulacrum/Commander's Sphere - Everything red needs, ramp and draw. While a bit slow, he helps get your commander out a turn sooner.