Whenever an opponent casts a spell, that player draws seven cards. 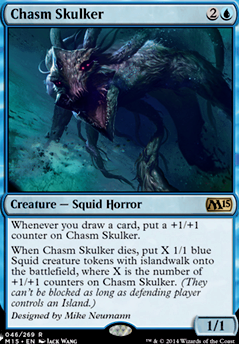 Whoops, I meant Forced Fruition was high cc, but not really for the risky payoff. Howling Mine and the rest are pretty low cost for what they do.

+1 for the Les Mis reference.

I would recommend cutting Howling Mine, Dictate of Kruphix, Master of the Feast, Forced Fruition, and Temple Bell. They all seem like they are good cards, but, in reality, they are traps. Nekusar's biggest problem is he fills your opponents' hands with the cards they need to stop you--these cards generally give your opponents more resources without significantly advancing your gameplan. The extra damage per turn if you have Nekusar or damage-dealers on the field is generally irrelevant, and they are outright liabilities if you do not have Nekusar fielded.

Instead consider running some of the following:

Curiosity is strong when enchanting Nekusar, and creates a draw/damage loop if you enchant Niv-Mizzet.

Helm of the Ghastlord likewise loops with Niv-Mizzet. When enchanting Nekusar and a wheel, it locks your opponents out of casting anything other than instant-speed spells.

Glistening Oil and Phyresis will allow you to get kills with Nekusar after 10 damage.

A few more instant-speed kill spells would also be a good idea.

DeinoStinkus - Day's Undoing is not a good card in Nekusar - its end the turn effect means you do not get any of Nekusar's damage triggers off the cards they draw.

Hereâs a list of cards I would strongly consider adding: