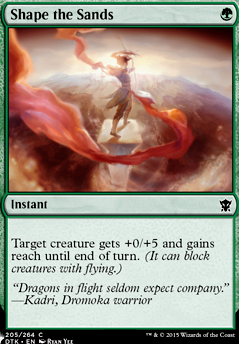 Target creature gets +0/+5 and gains reach until end of turn. (It can block creatures with flying.)

I donât think Hardened Scales is worth it when only Steelbane Hydra benefits by having one more counter... seems weak.

I feel like you need more ramp to get your plan into action quicker. Iâd be dropping Shape the Sands (it feels like a win-more card), and the beforementioned Scales, for some mana dorks. Arbor Elf could work great with Utopia Sprawl

I know what you're trying to do with the Wall of Reverence i do. But as you see, Assault Formation only makes your walls "assign" combat damage. So at the end you will only recive 1 or 0 life at most becuase its power goes back to normal att the end of combat.

I hope this helped in some way, Good luck with your deck!