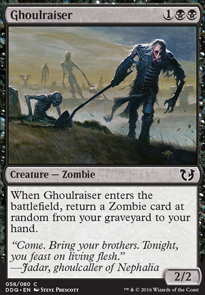 When Ghoulraiser enters the battlefield, return a Zombie card at random from your graveyard to your hand. 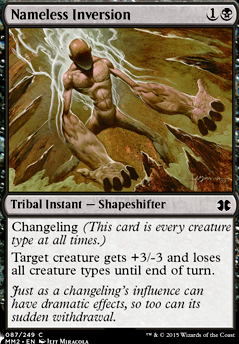 Suicide is occasionally the answer
by hungry000

Gisa and Geralf Zombies
by JoshTheRemover

So, black has goblins, and black doesn't really do random. It causes random discard or reveal with Hired Torturer, but otherwise, just Ghoulraiser's Zombie reanimation and Archdemon of Paliano's drawback, which I think is the only time randomness is used as a downside for black, so I feel okay using it as the "breaking" effect.

^that was my challenge for before, but I saw this challenge and love it!!

Similar to Ugin, the Spirit Dragon vs. Nicol Bolas, Planeswalker, I'd imagine Vivien's twin would be similarly creature-oriented, but very different direction. As Vivien means Alive, Morticia is a reference to death:

Creatures you control have Undying.

+1: Return target creature card from your graveyard to your hand.

-4: Return target creature card from your graveyard to the battlefield. Then discard a card.

-9: Each player exiles all creature cards from their graveyard, then sacrifices all creatures they control, then puts all cards they exiled this way onto the battlefield.

I'd like to see a common modal (charms, or like Charming Prince types) or split card (Adventures, Kamigawa flips, double-faced cards, etc.).

or, I may have been ninja'd again?

Yea that seems like the way. I like Ghoulraiser Fleshbag Marauder and Tattered Mummy . Gravedigger is good too. Card advantage is huge especially if you can gain life. Whip of Erebos ?

I play a multiplayer game weekly. The idea for this deck is to draw or search for Gray Merchant of Asphodel . Play Gravecrawler on turn one, turn two Dark Ritual for Phyrexian Obliterator or Culling the Weak for Undead Warchief and recast Gravecrawler from the graveyard. Next comes Midnight Reaper play Culling the Weak or Altar's Reap to draw a load of cards, or Entomb or Buried Alive to put the Gray Merchant of Asphodel into the graveyard then Ghoulcaller's Chant , Ghoulraiser or Zombie Apocalypse to bring him into play. In play testing if I get a really good draw I can play the Gray Merchant of Asphodel twice on turn 5 with a ton of devotion. The guys I play with have some good decks but there are no turn 2,3 or 4 wins.

Thanks for looking and suggestions!

Also I know it should be 60 cards, still testing to find the right mix. So far my mana curve is a bit wack I think but still a work in progress.

Thx a lot for the feedback! I like the suggestion to play more unconditional removal maindeck, but the thing I've realized with Snuff Out as well as Vendetta is that sometimes the life is too much to pay. I've played a lot of games with this deck that have come down to a matter of a few life points between winning and losing because of the 'suicide' zombies in the deck, and I think there may be too high of a chance of killing myself early. I try to maintain a 1:2 ratio of damage to myself and the opponent in the cards (with a few cards like Piranha Marsh to break the symmetry a bit) and Snuff/Vendetta might mess that up. I'll try out Victim of Night in main though.

I have tried playing a third Anurid in place of a Gempalm Polluter and it worked fine, but there wasn't a noticeable difference in performance. While testing with all 4, the issue of "too many" never really came up outside of niche scenarios where I flooded out and didn't have much board presence; and even then it helped draw some action so it was still useful. In the end I think it comes down to personal preference, and I like having the potential to chain them together and such (there's some sentimental value too <3).

I disagree with you on this point. Shepherd of Rot is a key part of the deck, and it's one of the cards I based the deck off of. Without it, the deck becomes exponentially less powerful, partly because it's a really good card and partly because I tried to fit in as many 1 mana zombies as I could in order to power up Shepherd of Rot and Gempalm Polluter and they themselves aren't very powerful on their own. And what do you mean by situational? The only situation you'd want to be in while playing this deck is in the process of lowering your opponent's life total (which Shepherd excels at), and if the game were to go late and the opponent wasn't on the verge of death the deck has an extremely low chance of winning in the first place (if it gets to that point I generally just concede) so I feel that "it isn't good in the late game" isn't a valid argument. You also say that it subtracts from the deck's aggro-tempo; how so? It's essentially a [weird] 2-mana lord with the downside of not being able to do damage the turn it comes down, but with the upside of being able to deal chunks of damage through blockers. Sure, without other creatures out, it's just a 2 mana 1/1 (<-- is this what situational refers to?), but with even 1 other it's acceptable and with more it's insane. It's a lousy topdeck for sure, but so is almost every other card in the deck; the key is synergy and high damage output. After all, the deck doesn't need to do well in the late game, it needs to win early, and Shepherd helps tremendously in that regard.

Of course, I could also get rid of it and play more Anurids and removal and stuff to bolster the midrange plan, but by then it would be a different deck.

Lifestaff has done really well in testing. It gives a creature +1 attack (every point counts) and with Carrion Feeder it's easily possible to gain a lot of life at once. I have considered Gary, and the biggest concern is whether I'd be able to cast it in time in the aggro matchup. I think Sylvok Lifestaff is the better choice in general, but feel free to persuade me. Also, I don't really get why you'd want a lifegain card for games that drag on; could you explain that to me? Are you talking about the midrange matchup or something? Is there a deck I don't know about?

I've tried Gurmag Angler in the past, but I think I got a ridiculously unlucky streak with it getting stuck in hand and cut it out of frustration lol. Would the Ghoulraiser slots be a good place to try it out?

Hm, Costly Plunder could be good in the control matchup. What would you suggest I cut for it?

Twins of the Dead

Not sure if you noticed but the list has 2 Ghoulraisers in it.

Cut Wight of Precinct Six, you're not playing a deck that cares about that

Cut Liliana's Indignation, your deck doesn't care about that

Cut Death Wielder, it's bad, and Veil, because it's expensive for something that doesn't help you at all.