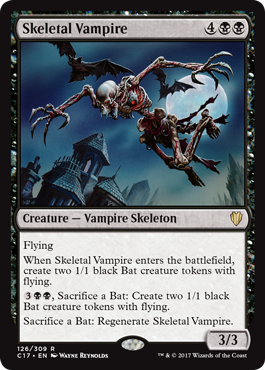 Ayara, First of Locthwain
by Trobison96 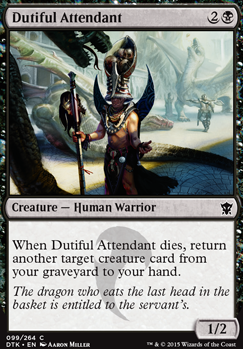 Hey jwong14 I finished the deck, I'm pretty happy with this build. I would like your thoughts on any cards I should consider for upgrading the deck. I decided Desecrated Tomb Skeletal Vampire and Mikaeus, the Unhallowed will be good upgrades down the line for token generation and undying creature buffs, but I would like to utilize Whisper, Blood Liturgist a bit more. Any advice? And thanks for all the prior input.

I will definitely try it. I thought The Haunt of Hightower would be a great card with Duskmantle Seer but I was mistaken, Skeletal Vampire will provide more value against removals, and even provide bodies against sacrifice.

Thanks for the feedback, appreciate it.

Tiddlydon Yeah, I'd say Skeletal Vampire is too much mana to replace any of the cards currently in the deck, especially since it's not a death trigger. It wouldn't do poorly though in a budget build, but I'd still personally rather play token generators that work off death triggers like Ogre Slumlord or Requiem Angel .

SwordOfMorning I don't usually kill with token damage, so I wouldn't play Vizkopa Guildmage . I could see running it in more of a token-centric lifegain build. This build doesn't actually gain as much life as you might think which is why I don't play lifegain payoffs.

Sabelaine Recruiter of the Guard isn't super necessary to the success of the deck, he just makes it more consistent. I mainly use him to start a Ranger of Eos death chain, but he can also get Blood Artist and friends which are the main wincons. If you're willing to spend the money he's a great addition.

Would Skeletal Vampire be useful as a token generator or too expensive?

Dont know what you are trying to do with the deck since you have several cards for others builds in here.Dont see a use for Bloodbond Vampire since you not gaining much life.Bloodhusk Ritualist for my deck wasnt that good. Kheru Bloodsucker not worth since you dont have my creatures for it.No reason for him at all unless its a fillerSkeletal Changeling.Chainer's Edict feel like there are better things that do this. Planar Bridge tutors are better. Not the best for how you have this deck built right nowBlighted Fen. Geier Reach Sanitarium dont use lol. Piranha Marsh use a Swamp. Not worth it Sorin's Thirst. Wound Reflection great card but not made for this deck.

artifact: Sword of the Animist

Definitely worth adding Necropolis Regent and Nirkana Revenant they both just add power to the deck Cabal Coffers is much more durable than magus of the coffers but itâs not an easy thing to get a hold of so definitely worth an add another not so easy thing is Cavern of Souls it just stops blue decks from countering your vampires, things Iâd remove for them gifted atherborn itâs not that great in honesty and Iâd remove Skeletal Vampire on the basis that itâs a lot of mana when you could have a bigger powerhouse in play like either of those two. Reanimating Wise you could add Patriarch's Bidding I always recommend it for tribal decks and I would still leave Mutilate in as itâs still powerful in a mono black deck Sudden Spoiling can help you get around nasty abilities or big monsters, if equipment is the way you want to go then Iâd add Lashwrithe