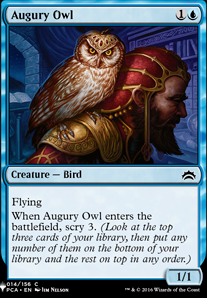 When Augury Owl enters the battlefield, scry 3. (To scry 3, look at the top three cards of your library, then put any number of them on the bottom of your library and the rest on top in any order.)

Augury Owl occurrence in decks from the last year

+1...I think you need more Scry effects to help set up your draws. I second Gattison suggestion of Augury Owl as a better option than Augur of bolas. Digging three deep is huge for this deck.

Boza: Again, you've got a very solid deck here, already. I'm only gonna have some experimental options for you, but you might like some of them. =)

I was going to suggest trying an Owl (Augury Owl/Spire Owl) instead of the Augur of Bolas, but, idk. The AoB digs just as deep and puts something in your hand. The Owls would dig into the top of your deck and help set it up for combos with Erratic Explosion. It comes down to seeing what you need more of in the deck. How does the deck run? Does the deck have a specific weakness it needs improving?

Beyond that, I only suggest that you replace the Guildgates with the lifeland, Swiftwater Cliffs, because they both enter tapped, and gaining one life is better than not gaining one life.

Hey McToters! Thanks for looking here and dropping a comment! I'll respond to each of your suggestions individually.

I didn't know Trailblazer's Boots existed, that's definitely "unblockable" in commander, lol. But, it's on par with Prowler's Helm (which is already in the deck). Hot Soup, it's a silly card, I've seen it before, but, 3 to equip is kinda rough and damage clause can be kinda sticky. Dauthi Embrace.. Hm.. That could probably find a spot in here.

While Stormtide Leviathan and Part Water is pretty memey, it's a one-time thing for a lot of mana investment, not a great thing to be doing in an aggro-ish deck.

Yes, I did consider Kindred Discovery, it's a great card, however, if I cast Augury Owl pre-combat, and then attack with 3 Ninjas, the top of the deck that I set up is now ruined. Coastal Piracy allows me to trigger it after I do my yuriko trigger, or if I know the top is garbage, I can draw first and then trigger Yuriko.

Heartstone doesn't, unfortunately. It only applies to things on the field. (And it helps enemies) If I wanted to do something like that, Training Grounds is the best.

What do you think about the Maybeboard and how they can slot in?