A deck can have any number of cards named Shadowborn Apostle.

, Sacrifice six creatures named Shadowborn Apostle: Search your library for a Demon creature card and put it onto the battlefield. Then shuffle your library.

Shadowborn Apostle occurrence in decks from the last year

That's a sacrifice I'm willing to make
by Freerunner19 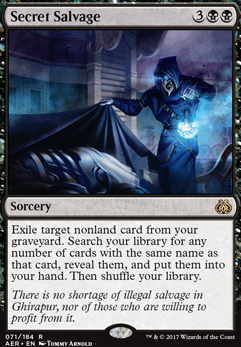 TypicalTimmy on Commanders that are hard to ...

I feel like it's hard to mess up Kokusho, the Evening Star. As long as you have a reliable (free) sac outlet and methods of recursion, you can pop him off multiple times per round.

The beautiful thing is, since you want him in the graveyard, you can do it in response to like bounce and exile effects. Literally nobody can stop it.

And if you are extra nasty, Helm of the Host him and go nuts.

And since mono-black already wants sac and recursion, I mean you're basically set. Hell, build a Shadowborn Apostle deck around him and slap on some aristocrats. Now you have four primary wincons; Flying combat damage from Koku and friends (Demons), life-loss from aristocrats, there's infect you can slap in with Skittles and others, and finally go big with stuff some giant black kill spells. I forget the names right now off the top of my head.

Well, I kinda like this idea rdean14! I'm assuming of course you mean a card in the same vein as Relentless Rats, Shadowborn Apostle or Persistent Petitioners. I kinda like the Apostle route, so here we go!

A deck can have any number of cards named Radiantborn Apostle.

: Search your library for a Angel creature card and put it onto the battlefield. You gain life equal to its mana cost. Activate this ability only if you control six creatures named Radiantborn Apostle.

Well, we got a White and Black Apostle, take your pick of the remaining three, and have at it! Remember. common power levels here!

There are a bunch of tutors on board to help fetch them up.

All I really need to go off are (1) Thrumming Stone, (2) Phyrexian Altar, and (3) my Commander, Athreos, God of Passage. I am assuming I will always get 10+ Shadowborn Apostles off Thrumming Stone, which might be a dangerous assumption. It will almost never work on a second cast, the number of Apostles still in Library would just be way too low.

So you start the game with 50 commons on the battlefield?

Then you cast an uncommon commander and shuffle 30 uncommons into your library?

So here's my build:

T1, tap 48 Petitioners and mill a grand total of 144 cards and pass turn. Everyone loses.

You'd also run into serious issue with Shadowborn Apostle, Relentless Rats and Rat Colony. You'd need to outright ban all of these. Relentless Rats has a common printing in Masters 25. Rat Colony is common in Dominaria.

Us_marine91 - that is tough since the Shadowborn Apostles alone will cost you around $100 for 30 of them. That being said, I would suggest looking for cards with similar effects to the non-budget options in JLK's deck. For example, Vindictive Vampire and Cruel Celebrant are budget alternatives to Blood Artist, or Butcher of Malakir is a budget version of Dictate of Erebos and Grave Pact. Then I would look for cards that have effects which are "close enough" to some of the more expensive options. For example, Command the Dreadhorde, Bolas's Citadel, Pitiless Plunderer, and Dark Prophecy can all act as passable stand-ins for Remembrance (I can't believe that card has somehow crept up to $5!), Thrumming Stone, Black Market, and Phyrexian Arena respectively.

I'd also recommend checking out EDHrec's Shadowborn Apostle page. There you can see which commander's are used for that particular strategy. They also have a budget filter which may help you find some replacement cards.

DrukenReaps on Banned and Broken Cards

I don't keep track of bannings outside of EDH and I barely pay attention to those... I think Aetherworks Marvel got banned at one point? I definitely love playing that card. Just insane value off of it in the right kind of deck. Shadowborn Apostle was where I had it for a long time. Now it is in my recently built Ayara, First of Locthwain aristocrats. Similar deck design but less janky.

Last_Laugh on Why are you not allowed ...

You can have as many copies of a card that you want... they just have to be named Persistent Petitioners , Relentless Rats , Shadowborn Apostle , "Plains", "Island", "Swamp", "Mountain", and/or "Forest" lol. Otherwise you're limited to a single copy of anything else.