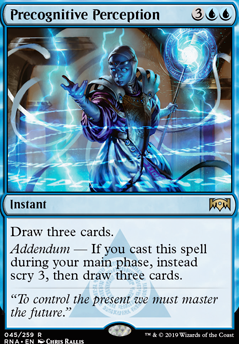 Addendum â If you cast this spell during your main phase, instead scry 3, then draw three cards.

haha you suck you cant do anything
by AdmittedPond48

Chromium, the Affordable
by budgetbeats84

Hi Matt_Mercer! I actually took out Jace's Ingenuity a while back, but if I were still running it I'd definitely upgrade to Precognitive Perception . Definitely a good call!