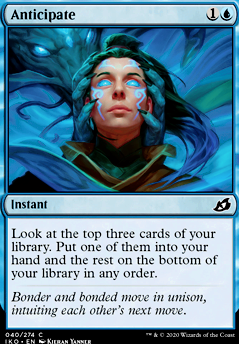 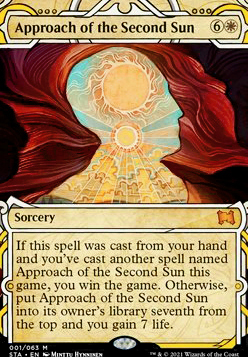 Drakes on Parade
by backinstep

Ensnaring Bridge + Bottled Cloister to lock out all your opponents from attacking with any creatures that have more than 0 power. Only works if your deck plays mostly at sorcery speed of course.

Tomorrow, Azami's Familiar with Zur's Weirding and a lot of life. Tomorrow will replace your draw with an Anticipate -like effect, meaning you don't draw the card anymore. Meaning your opponents can't make you mill the cards you would draw, and you don't reveal them. (Both effects replace your draw, and as the effected player you may choose in which order they apply. When Tomorrow, Azami's Familiar 's effect has replaced your draw, the Zur's Weirding can't replace your draw anymore, because the card you would draw, has already been replaced.)

How do you have mana for Alrund's Epiphany on T5?

Pretty good janky list. How do you usually win? Just a bunch of 5 damage burn spells to the face?

I don't see why Opt is in here. Sure it's a scry 1, but you don't really want to hit that with Codie. I think it'd be better if it were something like Anticipate or similar. Maybe Expressive Iteration ? It's not as good in big spell decks like this though, and you've got very strict mana requirements.

Speaking of mana, I think with as many pips as you have in these spells, you want as many dual lands as you can get. Add the rest of the snarls and the fourth triome for maximum consistency. Take out Fabled Passage, the castles, and some of the pathways. Basics still help the snarls come in untapped, but the castles don't add a lot and only tap for one color and don't help the snarls.

Sweet deck!!
In my opinion, Impulse and Anticipate are both preferable to deliberate and budget friendly.
Also you didn't mention your dualcaster mage + twinflame combo in your description. I also like Heat Shimmer over or in addition to twinflame bc it can provide value if your opponent is playing good creatures, and still perform the dualcaster mage combo.
You're already running narset parter of veils, so Windfall seems like a great inclusion.
Also i would vote for Reality Shift over one of your point removal sorceries like cut/ribbons. I have found instant speed exile can get you out of many tight binds.
Just some thoughts, cheers and have fun!!!

Court of Bounty is a new card that's good with Dragons and flying Dragons have the advantage of helping you to keep becoming the monarch. Consider adding some of the less expensive price creature tutors and an enchantment tutor? Dragonlord Ojutai repeatable Anticipate is also nice.

Because you have the Forest Triomes then land ramp spells that can search for a Forest are some upgrades and adding Ketria Triome would help.