{{G}}, Tap: You may put a creature card from your hand onto the battlefield.

Elvish Piper occurrence in decks from the last year

A Whole World Of Waves
by Dave-writer90

Path of Kathril
by Tulls

Xenagos, God of Revels that xtra combat is good
by articred 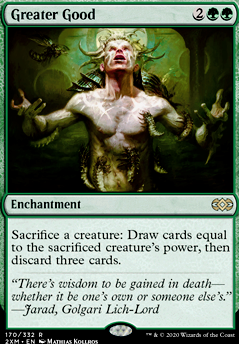 Hey there! awesome deck and love your content, based off of your video I can understand why you might want to keep your creatures green for your cheat effects. I was wondering though if you considered replacing one of the cheat effects like the Dramatic Entrance with cards like Quicksilver Amulet and Elvish Piper so that you could include the Eldrazi Titans?

Turn one: You play a Forest and Arbor Elf . Easy!

Voila, you have produced four mana, or just enough to play an Elvish Piper . Your opponent should be sweating at this point!

As with most new decks, I'd recommend starting any edits by thinning down to 60 cards. Your land count is really low for a 100 card deck, but it should be fine for a 60 card deck with enough mana dorks, so I'd cut 40 from the nonlands. The best cards to remove are anything with poor cost efficiency or minimal impact in the ramp archetype. Elvish Mystic is an example of a card to keep because it serves as a cheap accelerant towards your biggest threats. By contrast, Orochi Leafcaller does (almost) literally nothing in a mono-green deck except be a 1 mana 1/1. On the bomb side of things, I'd choose Terra Stomper over Arcbound Wanderer every time, especially since Wanderer only has synergy with the aforementioned snake. Then you have something like Demon's Horn which is pretty terrible in most black decks. And since this is a green deck, it may never trigger at all.

Once down to 60, I'd start looking for upgrades to the existing cards. Some elf ramp options I'm partial to are Joraga Treespeaker, Elvish Piper, Ezuri, Renegade Leader, Craterhoof Behemoth/End-Raze Forerunners, and Archetype of Endurance.

Elvish Piper and Quicksilver Amulet are ways to cheat them in from hand.

When cast, creatures are spells too.

"302.1. A player who has priority may cast a creature card from their hand during a main phase of their turn when the stack is empty. Casting a creature as a spell uses the stack. (See rule 601, 'Casting Spells.')"

Therefore, an effect that counters any spell (such as Render Silent) can counter creature spells. There are some ways to get creatures onto the battlefield (or "summon" them if that's the terminology you prefer) without casting them. One way is to cheat them in from the hand using something like Through the Breach or Elvish Piper. Another is returning them from the graveyard with something like Hell's Caretaker or Reya Dawnbringer. All of these creature "summon" effects can't be countered by Render Silent, although the cards themselves can be. In practice, that means a Through the Breach could be countered by RS but if Reya Dawnbringer has already resolved, her triggered ability can't be. The important thing is that these cards don't use the word "cast" as that would imply the creature is being played as a spell. Something like Skaab Ruinator would still be counter-able since it is still being cast, even if not from the hand.

It's also worth noting that instants and sorceries don't have to target anything to get countered. A Vengeance and a Wrath of God are equal in the eyes of most counterspells. Only a more narrow counter like Confound cares about what the other spell targets.