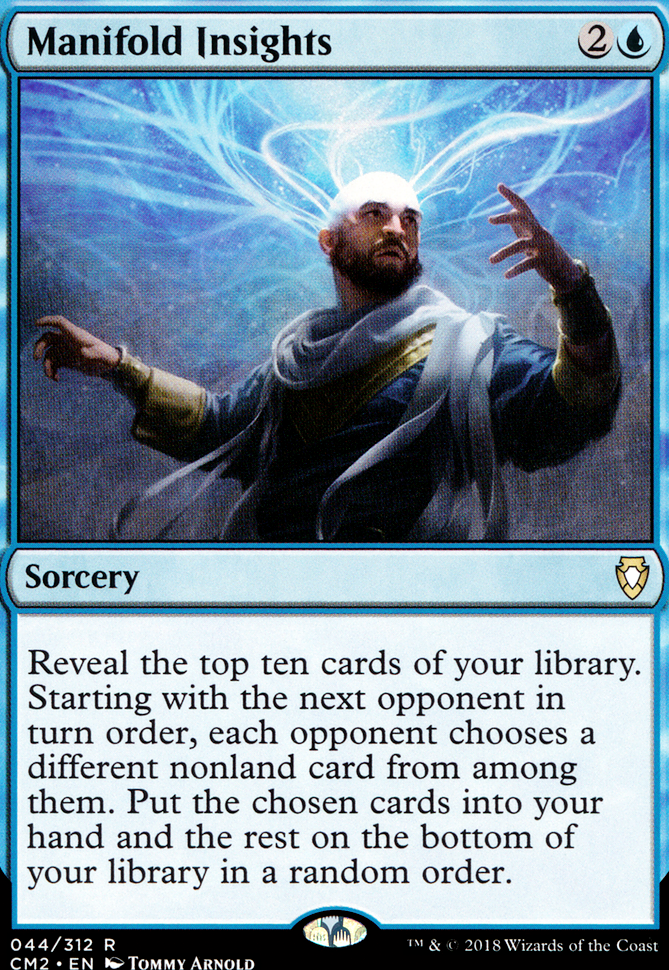 Reveal the top ten cards of your library. Starting with the next opponent in turn order, each opponent chooses a different nonland card from among them. Put the chosen cards into your hand and the rest on the bottom of your library in a random order.

Brobraam on What are your favorite underused, â¦

Mob Rule as a mass gain controll until EoT.
Boneyard Parley as a fact or fiction for graveyatrd creatures, and puts them on the battlefield.
Brutalizer Exarch creature tutor or non-creature tucker.
Gyre Engineer if you want to go infinite with one mana untappers.
Rashmi, Eternities Crafter always is good fun.
Plasm Capture as a more expensive mana drain if you're in simic.
Manifold Insights Gets better the more opponents you have.
Acidic Slime is a well known removal spell in green.

How has Manifold Insights and Recurring Insight been working out for you? and I feel like Trickbind might be a bit too narrow don't you think could add more bounce for the combo turn cursed totem removal?

And I see you've been plagued by our "pro's" amongst the casuals jaymc1130 and Skillville, a VERY sad bunch of casuals xD Anyhow good list!

The Sphinx: A Menacing Mystery

Absorb doesn't seem to be on flavour. How about replacing it with Manifold Insights ? It's free off your commander, you're testing your opponents (albeit with multiple choice), and you'll get three cards.