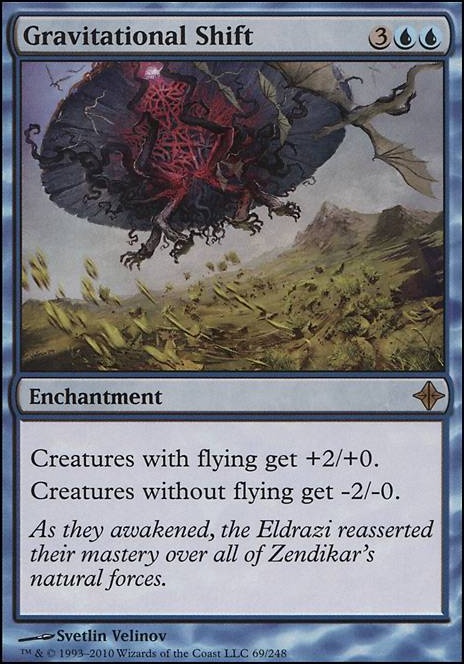 Creatures without flying get -2/-0.

This is a bit on the expensive end, but have you considered Gravitational Shift or Favorable Winds for anthem effects. Starnheim Unleashed also feels like it could be a pretty good top end for this deck. Hope this helps.

While this deck has long been the better version of my Birds deck, that doesn't mean it couldn't be improved, and with play a few things have stuck out to me 1) Never having the right coloured mana. I own so many decks that upgrading them all with better mana bases is impossible, but I have finally conceded that this is one of my favourites and therefore should have something better than Tranquil Cove for dual mana. Note, still limited by a mix of what I had, what I could source, and what I could afford for the about Â£30 I was prepared to spend on these modifications.

While I was buying cards, I decided to look into what did and didn't get played in this deck. Emeria Angel is a fantastic card, but it turns out that the 4 mana cost is too high, I'd rather be playing more smaller things. Also wanting to put it off until I could use the landfall made for poor play decisions, so it's being cut. In it's place needs to go removal. Sadly proxied for the time being.

The last two changes are cards I discovered while having a search. Warden of Evos Isle is the underrated MVP of this deck, I always misjudge how good it is. However being in White as well as Blue, it turns out that there's a cheaper Bird that does the same effect, with a little extra upside.

+4 Watcher of the Spheres

Last on the changes list are my blue enchantments. Favorable Winds and Gravitational Shift are both perfectly good cards, but the former is always a tad underwhelming for not having a body, and the latter is actually too much mana. so they're getting swapped for Empyrean Eagle which has a body and gives the boost too, at an acceptable 3 mana.

Blink and Bounce and Blow

Ishai, Ojutai Dragonspeaker and Gravitational Shift are both fun cards in a flyer deck.

Endless Scream , Howl from Beyond or a few more cards to increase Rogue damage might help.

If you traded out rogues until you had almost all fliers you would open up a lot or fly/anti-non-fly cards. Gravitational Shift is great defense and offense