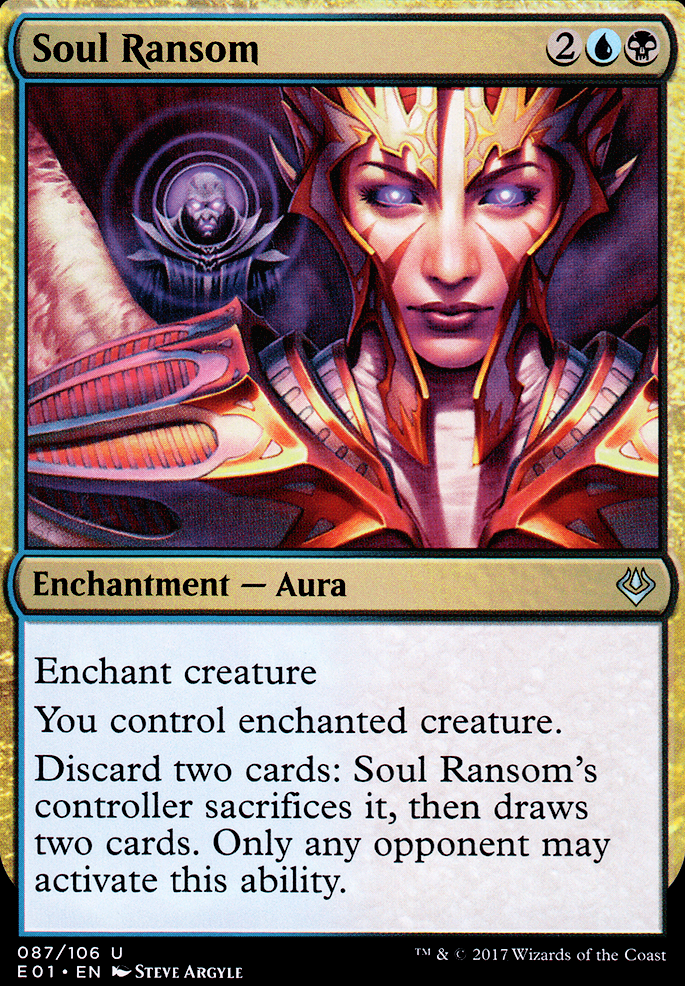 Nicol Bolas, the Ravager
by SweetDreamsies

Tyrant-Thanatos on Decks you want to make...

Idk about decks I want to make, but I definitely have built a few that I don't play frequently for the same reason. Nekusar is a huge guilty pleasure of mine. Wheels always have been for me since I pulled a Teferi's Puzzle Box back when I was brand new. I remember never really understanding why all my friends hated it lmao.

And then there's theft. My guilty favorite form of removal is to turn them against their owners. It always feels so awful though. I've actively gone hunting for theft effects that "feel less bad". There's not a lot of them... but I do enjoy me a good Abduction, Soul Ransom, or Master Thief. There was definitely a period of time in my playgroup that I was rightfully persecuted as "the Treachery guy".

Control of a creature is a timestamp - when the control effect ends, for whatever reason, control reverts back to the latest control effect that still applies.

So, if someone plays a creature, another player casts Mind Control on it, and yet another cast Soul Ransom afterwards, the third player will control the creature. If someone destroys Soul ransom, control will revert to the Mind COntrol player, and if both are destroyed at the same time, control will revert to the player who put the creature in play.

I Soul Ransom an opponent's creature. I now control his creature but I die... Where does that creature go?

Thanks for all the tips, already made a few changes to the deck now that I'm quite happy with. Still considering making more changes. I have now included Mind Stone and Basalt Monolith for more ramp. Also running Frantic Search , Careful Study and Ancient Excavation now.

I also added a few more lands that I can sack to get more value out of Crucible of Worlds , not looking to invest too much money in lands though because of the overall low impact of including those expensive lands ( Cabal Coffers being the only thing I might really want because of its high impact). Three sac lands was really not enough to justify Crucible of Worlds , honestly should've done something about that far sooner.

Going to consider putting Harvester of Souls in the deck, not going to invest in a Damnation however, a bit too expensive for what it does. More likely to run Life's Finale or Necromantic Selection instead if I feel like I need more boardwipes.

Wanted to mention why I run Unstable Obelisk . It's in the deck as a way for me to deal with non-creature permanents, it's more a removal spell that also acts as a mana-rock instead of the other way around. It's also a great bartering tool in my opinion (not to mention Ashes to Ashes is also kinda unattractive since I don't want to exile creatures, I'd rather have them die so I can Eternalize them with The Scarab God ).

I did end up cutting Soul Ransom , but the card was honestly used more to gain card advantage, I was totally fine with people discarding two and letting me draw two (basically Divination and Mind Rot for one card). You can even sack the creature in response to the discard, you still get the cards, but they don't get the creature back. Holding their commander hostage this way is in my opinion pretty good. If you don't draw cards off of it at least you get to have control of the creature, so win-win really (admittedly this card is way worse if they have cards they don't mind discarding in hand, but still, you at least draw two).

What I should've mentioned before is that I'm not too keen on running more tutors. Too many makes the deck too repetitive to play and more importantly, to play against. Friends have already complained about my life-drain combos being a bit much and happening too frequently.

Going infinite is not something I typically look to do either, which is why Gravecrawler is in the maybe section. I know he's incredible, but he kinda feels too easy to exploit, still on the fence about including him.

Overall thank you again for all your ideas, some of the changes you've suggested have helped already and I certainly have plenty of choices to consider now! Feeling a lot more con