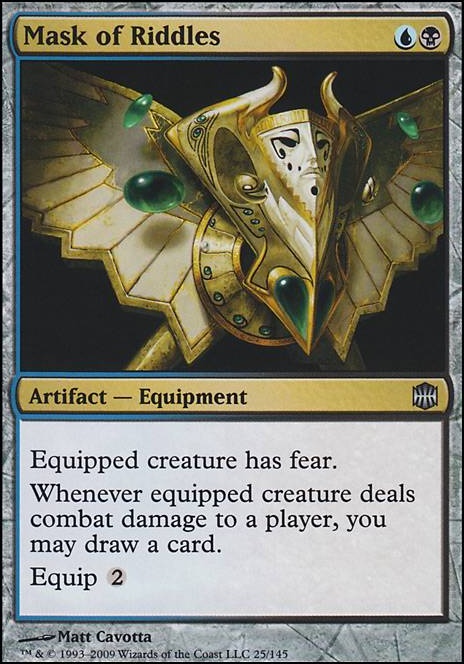 Equipped creature has fear. (It can't be blocked except by artifact creatures and/or black creatures.)

I'm undecided on Phage, although I will do some play testing when I can for Anointed Procession and Faerie Formation . Although the card I see most likely to be axed first would be Mask of Riddles

KingOfMist I also saw,some really cool cards for my Rayami deck here. Bloodforged Battle-Axe , Gift of the Deity , and Mask of Riddles are all incredibly good. Endless Scream seems amazing too!

Drifting Silumgar Hates Your Board

Yes! Finally, a Silumgar the Drifting Death deck. Palace Siege would be a flavourful and powerful inclusion in this deck. Living Death would be a good source of recursion in this deck. Painful Truths is a good source of card draw. Diabolic Tutor can help you search for the cards you need. A good land to include is River of Tears . Sign in Blood would also help you out. Mask of Riddles is also an include you could consider. Bitter Ordeal could also be fun.