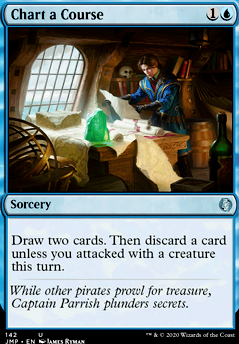 Draw two cards. Then discard a card unless you attacked with a creature this turn.

The Endless Tapestry
by Azeworai 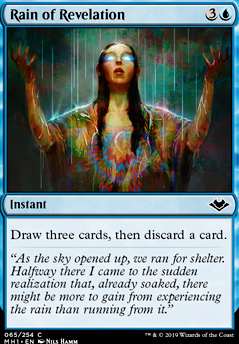 No Souls, Only Shadows

magwaaf, here is the explanation for the sideboard cards: Damping Sphere for tron + storm, Fog for any aggro decks, Gaea's Blessing for mill, Negate for combo + control, Tormod's Crypt for any decks that rely on graveyards (Dragon's Rage Channeler and stuff), Void Mirror for cascade decks, and Tombstalker and Gurmag Angler just to change up the threats in the deck.

wallisface in my playtesting of the deck, the mill cards have been pretty consistent. I agree that sorcery speed cards aren't good in a control deck, however I like Chart a Course because I both draw and discard, and it's the only discard effect. I'll do some research on some instant speed looting effects. I run 3 of each of the creatures so I'm less likely to draw them, and for room for other cards. I'm so dumb, I love both Bone Shards and Collective Brutality, I can't believe I forgot about them! You're probably right about the lands. I'll playtest with all the cards you suggested, thanks!

No Souls, Only Shadows

You donât appear to have many self-mill effects, whichâll make getting both those cards in the grave awkward.

I donât really want it to be a Arclight Phoenix deck, just want my prowess stuff. Plus I would have to add more discard outlets for Phoenix like Chart a Course and such.

The Stormchaser Mage are gonna be replaced with Soul-Scar Mage if I like the format enough to buy them.

Iâm currently at 20 lands with the Spikefield Hazard Â Flips. And I think Expressive Iteration is too good not to play. Itâs even seeing play in Modern.

If I played Izzet Charm it would replace Prismari Command .

Iâll see about fitting some Lightning Strike s in.

This deck is a really cool concept, but i feel like it might more efficient as a reanimator deck. Like you can get him into the graveyard with tutors Buried Alive Gravebreaker Lamia Entomb , or just by drawing and discarding aggressively with Cathartic Reunion , Chart a Course , Faithless Looting etc. Then once you got him in your graveyard you can just Bond of Revival , Body Double , Dread Return , Exhume , Victimize . cause as of now he costs 8 mana and only one other card is gonna be able to cascade into him so either 8 mana or 10 mana which is a lot of mana right. in terms of the fling plan thats awesome, you can even replace a land with Kazuul's Fury Â Flip, and even add Chandra's Ignition for that fiery finish too