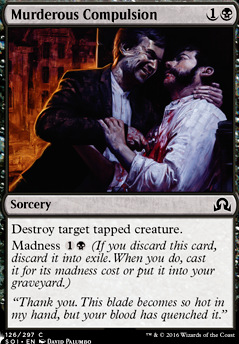 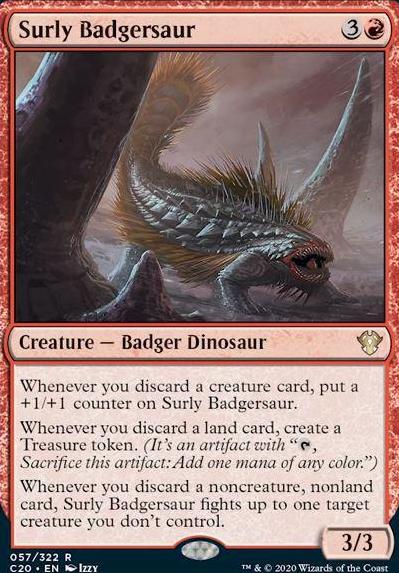 Hey, I appreciate your wanting to do something a little different, I would just suggest cutting Waste Not and a couple of your other opponent-centric discard cards like Quest for the Nihil Stone . You don't run very much outside of The Haunt of Hightower that causes them to discard to make it worth the include.

Minor thing, but you have 2x Murderous Compulsion s.

Here's my own list, it's pretty flexible while still being fairly tuned We're All Mad Here (budget cEDH).

Wight of Precinct Six could be cool for this especially in multiplayer. Discard also always works well with Madness, maybe at least some Murderous Compulsion or Dark Withering for the sideboard to remove anything that does get through.

The overall combination is definitely better suited to a commander deck, especially under Markov since you can make use of all three major vampire colors and the Bloodlord of Vaasgoth , which plays all kinds of dirty with vampire tokens.

Regarding Keeper, the buff it provides is monstrous if you can get it flipped, but I don't especially care for it in a R/B Madness deck due to its low to the ground and swing nature -- Keeper is a much more midrange-y card, and I certainly recommend it more in a token based deck, alongside the Aristocrat.

I didn't even think to use Jump-Start cards in a Madness deck, but that's a pretty good idea -- discarding for an upside then using it as an outlet later is pretty sweet. Makes me rather sad there weren't more viable options printed, because the cost on Risk Factor makes it hard to hit a Madness trigger off of it, and Maximize Velocity is only sorcery speed. :(

When it comes to the Gorger, granting Madness to your other creatures is a hell of an upside, but in my testing I've found it is more difficult to plan around than I'd like, since you often don't have one in your opening hand, and they are extremely easy to kill. It's one of the major reasons I've been toying around with the Neonate again, just for a second one drop in the deck for more consistent turn 1 pressure.

I don't think I mentioned it before, but Call the Bloodline is another interesting option; I don't like it for a traditional red/black Madness deck, but it is quite nasty in a mono-black control variant I run alongside things like the Voldaren Pariah  Flip, Murderous Compulsion , and Dark Withering -- you might look into that with how black heavy your list is, especially since you can work in Psychotic Episode for some Madness handhate and make better use of the Highborn, Condemned, and Captivating Vampire you are running.