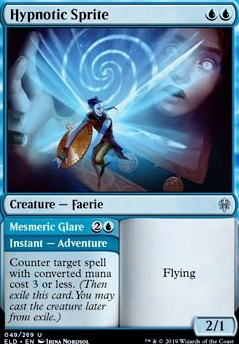 (You may cast Hypnotic Sprite from exile if you sent it on an adventure.)

(You may cast Mesmeric Glare for from anywhere that you have the permission to cast this, then exile it on an adventure instead of putting it into your graveyard. When you have not chosen to cast Mesmeric Glare, this card is treated only as Hypnotic Sprite in whatever zone it is in.)

(Example scenarios for Mesmeric Glare| You may cast this off of Melek, Izzet Paragon. You may not target this with Snapcaster Mage. Thalia, Guardian of Thraben increases the cost of this. Electrodominance requires X=3. If your opponent owns this and you cast it, only you may cast Hypnotic Sprite when it goes on an adventure. You may cast this from a cascade spell if the spell has a cost greater than Hypnotic Sprite's cost.)

The Grand Arbiter
by Amender 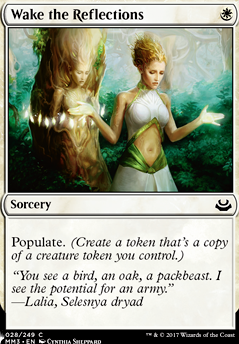 As I understand, a card like Hypnotic Sprite can be used in a deck that has Lurrus of the Dream-Den as a companion. But can Lurrus cast the adventure side, Mesmeric Glare, from the graveyard, or can it only be cast as a creature through Lurrus's ability? My interpretation is that Mesmeric Glare is an instant, not a permanent, so only the creature side can be cast this way, but I want to confirm this.

Draining Whelk and Hypnotic Sprite become reusable counter spells. They have flying so you can usually Ninjitsu off of them. Faerie Duelist is useful.

If you run out of Ninjas Feldon's Cane or something to refill your library could help.

Higure could do some serious commander damage with Octopus Umbra

Thanks for the input, Jackfrost23 and sac_ld. Much appreciated. Iâm relatively inexperienced in the game, so Iâm always looking for ways to improve.

I had initially considered Faerie Seer for that coveted 1 drop slot, but ideally I think a Thoughtseize is the best Turn 1 play. The ability to scry from the Seer would be nice, but I donât feel justified in removing anything to make room for them. And after the first couple turns their inherent value plummets. They canât be flashed in, and once Bitterblossom enters play theyâre superseded by the tokens.

Hypnotic Sprite came to my attention just as I put the finishing touches to the deck. I briefly considered retooling it, but decided against it. Itâs a high utility card, to be sure, but the lack of flash is what did it in for me. I designed this build to be highly reactive; most of the cards can be played on the opponentâs turn if necessary. Hypnotic Sprite absolutely could (and should) find its way into another faerie deck, maybe a mono blue one if I ever get around to building one.

I've been tinkering with something similar, been trying to up the creature count by running Faerie Seer as a 1 drop Faerie and Hypnotic Sprite as more main board counter spells

OneWinged on Advertise your MODERN deck!

I want to make a control deck around Isochron Scepter, Silence and Teferi, Time Raveler.