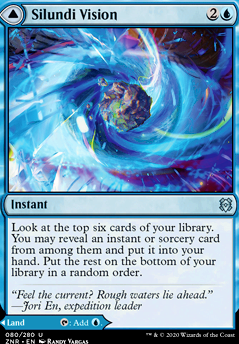 Look at the top six cards of your library. You may reveal an instant or sorcery card from among them and put it into your hand. Put the rest on the bottom of your library in a random order.

Azami School of Wizardry
by ZionZaiyer

Sea Gate Restoration Â Flip Jwari Disruption Â Flip Silundi Vision Â Flip all pretty good, and them being tapped lands isn't as bad when your commander is so expensive

Playtesting, I'd advocate for more draw and 2 lands. I feel a lot of the creatures are do-nothings if you're not comboing off. Probably some more protection too, Jin is expensive and provocative

Izzet Even Funny Any More?

These would all let you cut a few lands but work with Yuriko's flipouts. Some are better than others, of course.

Introduction to Prophecy seems like an easy inclusion here. Similar to Tezz's Gambit, but scry 2 instead of one of the draws, and no proliferate. Also, thoughts on including Silundi Vision Â Flip as another way to dig 6?

Here's another handful. Riddleform allows scrying at will, albeit for 3 mana, but it's also a creature as needed, and probably a lot of the time anyway.

Stream of Thought and Stream of Consciousness are good recursion cards; you probably (hopefully) won't have to recur more than 4 cards at a time and these are cheap to cast.

Don't forget to work in Solve the Equation somewhere!

An interesting card I pulled from a pack is Silundi Vision Â Flip, which I swapped in for an Island. As a land it's slow mana, but the spell side is perfect for this deck.

Another random pull for me was Mystic Reflection . I would have to classify it as a spot removal which actually erases the identity of the card, kind of like those enchantments I linked before, but you hit the target before it enters the battlefield. You can also can potentially hit more than one target.

Finally, I know it's out of budget range, but I can't help but squeeze Shark Typhoon into the deck because I got one and I want to use it. And it works well with the premise of a mostly-instants-and-sorceries deck.

I'll probably add Boseiju, Who Shelters All because, again, it's burning a hole in my pocket and it's really good in the deck. But it's definitely not a budget card. 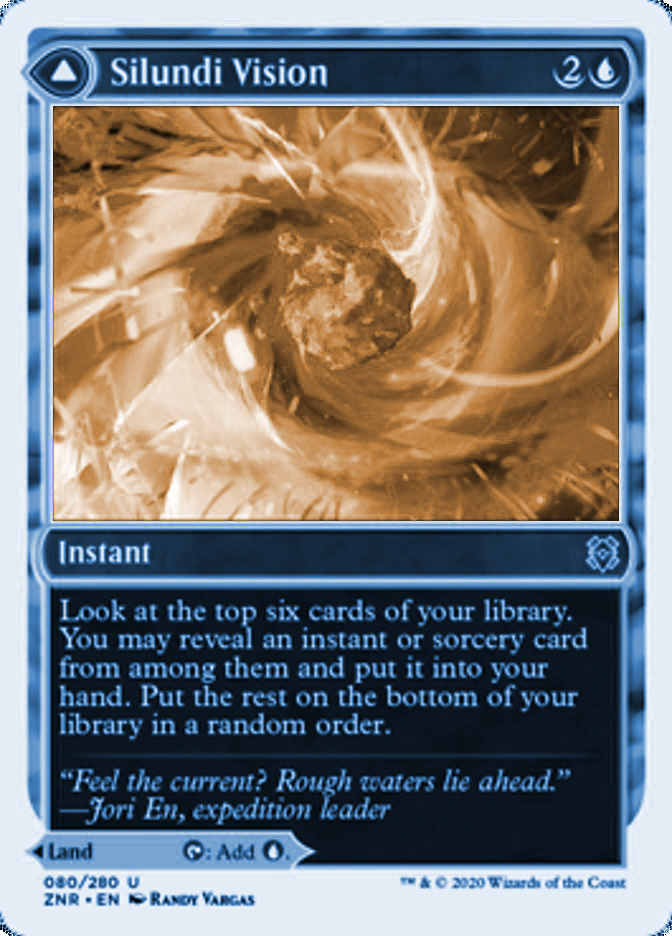