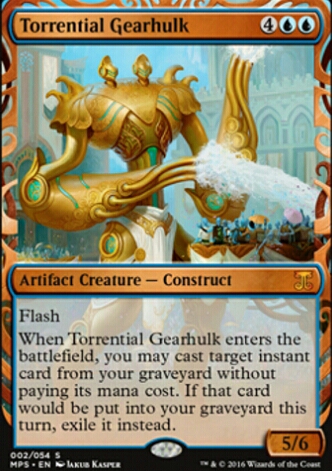 When Torrential Gearhulk enters the battlefield, you may cast target instant card from your graveyard without paying its mana cost. If that card would be put into your graveyard this turn, exile it instead. 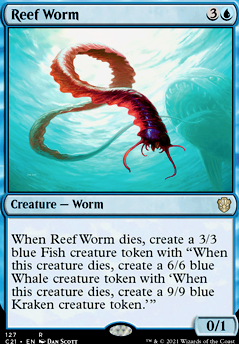 Party on Wayne, party on Garth
by joselemanouch

Jeskai Thing in the Ice
by merlinjim

You generally don't need to exile all copies; and furthermore, by the time you can cast Crumble, they already have tron assembled. Setting them back 1-2 turns is generally enough when you're playing control.

Regarding replacements: if you're looking for other cards, Kroxa is SUPER good. Taxes them early and wins the game late. There's plenty of other playable options though: Liliana, the Last Hope is good (though best with more creatures to recur), Kalitas, Brazen Borrower , Nimble Obstructionist , Tasigur, even Murktide Regent . Sprite Dragon is also an absolute beating, but would need a significant rework of the deck to get max value.

I'm also a sucker for the Torrential Gearhulk / Into the Story package if not running Lurrus.

~ can not be countered, flying, trample, protection from colours.

When you cast ~, draw 5 cards, then reveal a card from your hand. Exile up to 2 target permanents with mana value equal to or less than the mana value of the revealed card. If you revealed a colourless, non-artifact card this way, take an extra turn after this one.

ULTRA ANNIHILATOR! Slapping two creatures on one card is not unheard of ( Anax and Cymede for example).

Hardhitta7 on Trying To Choose A deck

I like the first one best but I would go up on Torrential Gearhulk . Maybe fit some Remand s in.

Honestly though I would pick which ever one you would have more fun playing.

I have an Isochron Scepter from The List and a Primal Amulet Â Flip from Ixalan and want to trade either for a Chandra, Torch of Defiance , Nissa, Vital Force or Torrential Gearhulk .

I have other stuff in my binder to add to the deal, Iâm trying to complete my Kaladesh set so the cards must be from Kaladesh.

Edit: Got a Chandra and Nissa, still need a Torrential Gearhulk , Scepter is gone but I still have the Primal Amulet Â Flip.