Whenever you cast a noncreature spell, create an X/X blue Shark creature token with flying, where X is that spell's converted mana cost. 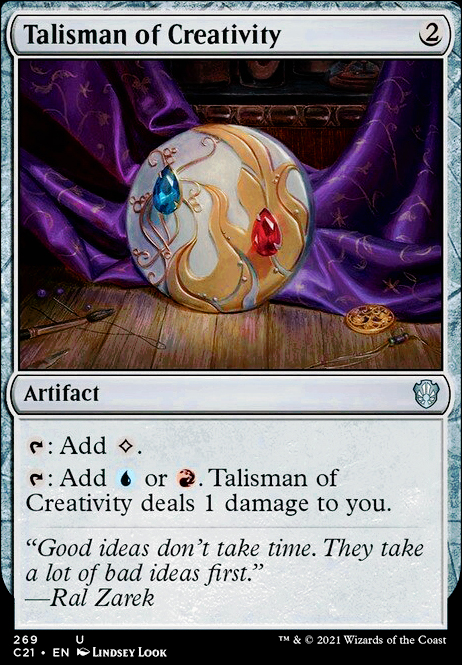 With all the instants and sorceries you're running you could use Deekah, Fractal Theorist, Talrand, Sky Summoner, Metallurgic Summonings, and Shark Typhoon

Craterhoof Behemoth and Finale of Devastation should offer some other win cons.

Some honest advice, the list seems like it is trying to do too much, it looks like a tempo build but tokens wants to put out as many tokens as fast as possible, blue offers you some other protection you can use in the form of counterspells and white can give them some protection like Teferi's Protection. You could still make due with some of the above suggestions and add some instant and sorcery token generators like Entreat the Angels, though your general would prefer you to run more creatures that can generate tokens.

MixDr0n3 thank you for taking the time to type all that out! This is the first version of the deck and it is still quite rough indeed. Idk how I messed it up but Stony Silence was supposed to be Rest in Peace, I'll fix that right away.

As for a lot of the other things I'll start by saying I haven't been terribly active in mtg since around ixalan. I made a few decks and play online a little but I'm looking to make a full return to the game. That said Prismatic Ending is a card I'm still unsure about 4 of. I'm thinking it'll probably make it to 3 but with the Path to Exile and Fateful Absence idk if I need 4 of it as well. I also don't know the meta all that well so I could be wrong and further testing will help me figure out my numbers better. Shark Typhoon is another I'm testing I've seen it in control lists and it's interesting but I'm also not sold on it quite yet even though I really do like cycling it for flash uncounterable creatures.

It is meant to be a control leaning midrange deck and I agree I probably will need a few more mainboard creatures. With my payoff Geist of Saint Traft is a one of because he's really easy to kill in combat (when I was first making this list I wasn't thinking about my swords giving him psudo-unblockable) and his copy count will probably increase. Tireless Tracker I see as both engine and payoff because of how he can scale through the game. As well as Teferi, Hero of Dominaria making it hard to lose if I get his emblem off.

Ceremonious Rejection is just anti-tron because I remember it being a problem back in the day. Anticognition does seem like a more flexible card and I'll do some testing with it and probably run it, I've never seen it before. Weather the Storm is only for playing against storm/eggs and Summary Dismissal was for storm and if a deck wants to actually cast Emrakul, the Aeons Torn. Vendilion Clique is honestly only side because I never even thought of it as a mainboard card tbh. I don't remember ever running it main in blue moon, delver, or control. Idk why it's just never crossed my mind as that's where I've always seen it and had it. Qasali Pridemage is run over something like Broken Bond because even if the enchant/artifact he's brought in for doesn't come up he's still a creature and can be used for beats. I'll see how running a non-creature for that is in this list for sure though.

Thank you again for the time it took to type all that. I really do appreciate it and you didn't come off as a jackass at all. You were giving advice and that's what I asked for.

This is going to be a long one:

I don't want to come across as a dick. There is potential here, but I also see a few issues. So please don't take what I say negatively, I'm just trying to offer my perspective and advice on it. But at the end of the day, the only evaluation and opinion that matters on your deck is your own.

Now, looking over your deck, I've got several questions. First and foremost: why the hell are you only running 2 copies of Prismatic Ending? That should be a 4 of every time. I would take out the Shark Typhoon in favor 2 more Prismatic Ending because I don't feel that the Typhoon is very helpful the majority of the time.

Question number 2: what is the goal of your deck? I don't get any kind of central idea or goal when I look through this list. It feels like every card operates on it's own rather than all cards working together towards a decisive victory.

The Swords, while great cards in their own right, I don't feel that equipments really have a place in this deck for the simple fact that you only have 9 creatures. Yes, a third of them are Stoneforge Mystic but with only 9 creatures in the deck how much can you reasonably expect to gain from having the equipments especially since they are all only one of's.

Weather the Storm? Really? How much value are you ever going to get from that in this deck? Maybe 6 life gained? It's not enough to warrant a spot in the sideboard, especially since your life total does not matter in the slightest until you get down to 0.

Ceremonious Rejection and Summary Dismissal are very questionable additions when Anticognition or Negate exists. What I like about Anticognition, especially in Modern where Dredge is pretty prominent, is that if your opponent has a bunch of cards in their graveyard then you get to scry 2 while countering their spell. That's value, and it can counter any spell whereas Ceremonious Rejection can only hit colorless spells. Hell, even Negate can only hit noncreature spells but that is still a lot more viable than only colorless spells considering how many more noncreature spells there are than there are colorless spells.

My biggest concern is that while you're basically in a Bant control deck, you don't have really any pay off. If you are going for a control style deck, then what is your endgame? How do you plan on winning? Is it with Geist of Saint Traft? And if so, why is Geist only a one of?

Overall, there is potential here. But there is an equal amount of questionable and possibly sub-optimal choices in here too. I would like to see some more cohesion and a more clearly defined strategy/goal. If you want to go control, I'd suggest having some more payoff/ways to end the game. Not necessarily more creatures, but more of the right creatures (like Geist, that is a very good card that I am absolutely amazed that you only have one in the mainboard. And also some more card draw to help find your payoff, maybe something like Serum Visions or something along those lines. Conversely, if you want to go more midrange, then you might want to run a few more creatures. Maybe in the range of 13-17 creatures. Either way you go, you might want to consider tossing the swords and the Mystics in favor of other cards that benefit the ultimate goal. They're all great cards but again they don't help out too much in this list.

And my final closing thought is that the sideboard is very rough to say the least. There's not a single card in the sideboard that I'm really a fan of in the context of this deck. I mean, Stony Silence completely ruins the inclusion of the equipments unless you take them out when you bring it in because equipping is an activated ability of an artifact, which can't be activated because you brought in a card with a symmetrical effect. And Summary Dismissal is not that good outside of commander. Weather the Storm isn't likely to get you much of anything since you're not actually playing storm. Ceremonious Rejection is just a bad card when there are many other better conditional counter spells that exist.Qasali Pridemage is ok, but if it's in there for the enchantment/artifact removal, then there's better options out there like Broken Bond. Vendilion Clique is a good card, but it should be a mainboard rather than just hiding in the sidebaord. Same thing for Geist of Saint Traft. Geist should be no less than a two of but it would be best to have at least three of him in the mainboard.

Again, I don't want to come across as a jackass. I just want to offer some advice on what I see. And what I see is a concept that has potential to be really really good, but is a little too all over the place to get there in it's current state. Just a bit more cohesion and a central idea as to what you want to do would go a very long way. I hope that you were able to find something useful in what I've said, but again if you disagree with me then that's fine. It's your deck, and the only thing that really matters is whether or not you enjoy playing it. Happy hunting, my friend.

Oh another card that's Game Winning or Great is Shark Typhoon. It's a bit like Hydroid Krasis but not as good. Unbound copies the cycling ability, so you draw twice but doesn't copy the shark token since the shark ability part of Shark Typhoon, not the activated ability. It also doesn't double the shark p/t since unbound copies the ability, not doubles it. The reason why it's amazing is that you can ambush an attacker + draw for some serious card advantage. Cycling is also uncounterable which is a big deal.

Do you need Secure the Wastes? It should probably be a Jace, the Mind Sculptor or another Shark Typhoon.

If you're not flush with Planeswalkers, big-bodied fliers, or persistent threats are good options to swap in. Dream Trawler , or Shark Typhoon or Voracious Greatshark , or any of those. Brazen Borrower would be super strong in here. Elspeth's Nightmare and Elspeth Conquers Death would be solid. Realm-Cloaked Giant , Extinction Event would be good in here. Zendikar spell-lands could add versatility, but make sure to preserve the Snow-core.