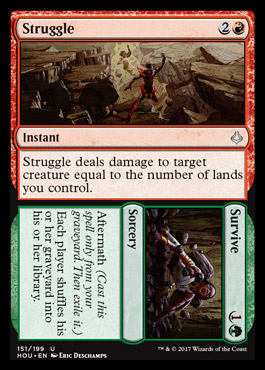 Struggle deals damage to target creature equal to the number of lands you control. 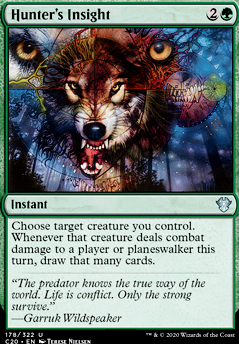 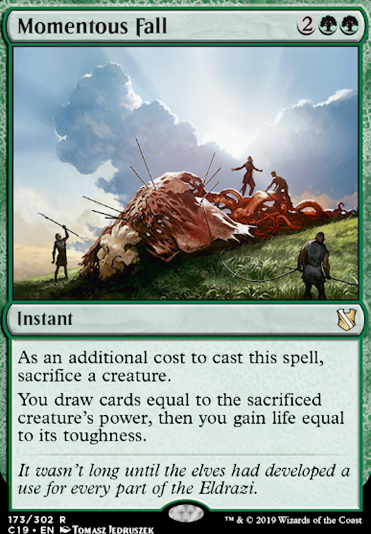 Wrath of Dog
by metalevolence

Ruric Thar or Godzilla
by 9zap 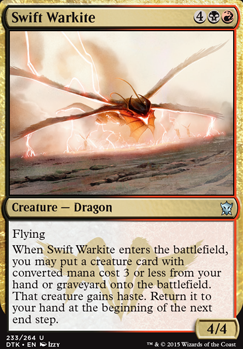 TypicalTimmy on Theros: Beyond Death Spoilers

I think that new Satyr Commander is a solid one for Gruul. Let's be honest, Gruul wants to attack, and card advantage is everything. So drawing cards for attacking? Sign me up for that shit.

To get around the whole "at random" bit, just pick cards that can be interacted with in the graveyard. Flashback, Madness, you got Heaven / Earth , Mouth / Feed , Insult / Injury , Struggle / Survive , etc. And with Crucible of Worlds , Ramunap Excavator & Wrenn and Six you can get your lands back. She also helps produce an anthem effect if you'd like to use Xenagos, the Reveler .

I don't think I'd recommend Dredge, but I mean it is technically an option.

So it seems like a really fun chaos deck. Lots of wild interactions and unexpected plays, if that's your sort of thing.

In fact, if building a chaos deck is your goal, this would actually be one Tibalt, the Fiend-Blooded would work well in. 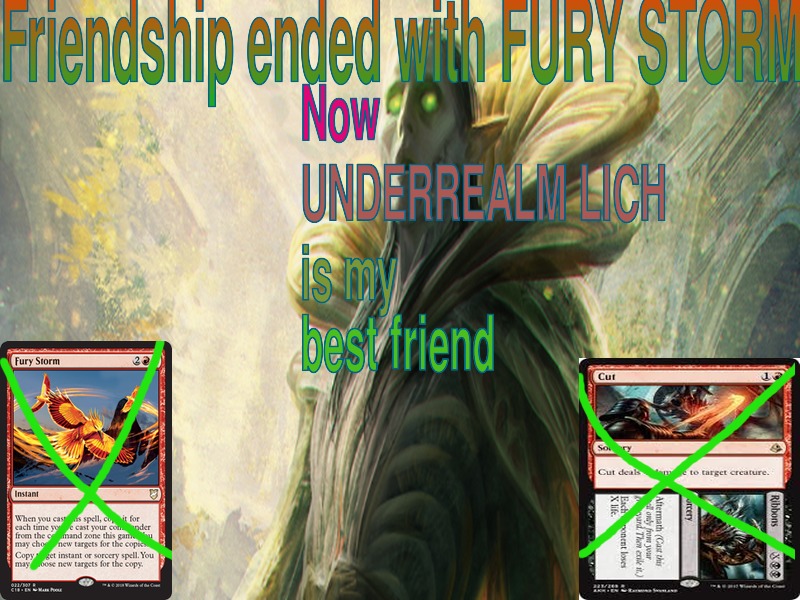 After some more testing it has confirmed that Fury Storm simply will not cut the mustard in the deck. Now it is time to try something fresh: Underrealm Lich . Now this presents a very powerful avenue for card selection and graveyard filling, however presents a challenge in that you may possibly deck yourself as the deck has no ways of shuffling the graveyard into the library. While I haven't yet had any issues with potential decking yet, it's always better to be safe than sorry.

The first thing that came to mind was Elixir of Immortality , or simply putting in one of the eldrazi titans to provide more reliable (but less predictable) anti-mill but honestly in the colours present the options are rather limited. Another possiblity was Struggle / Survive which is fairly cheap and offers instant speed removal for a fair amount of damage along with a cheap shuffle effect.

I've since gotten my hands on a Cabal Coffers so that is going into the deck, replacing Canyon Slough . Often the amonkhet cycle lands feel worse than the single mana cyclers like Forgotten Cave or Barren Moor and all too often have ended up being discarded to an uptick of Lord Windgrace , who doesn't care what kind of land you discard at the time.

After more testing, Winding Canyons has not been the game changer that I had hoped, but I will give it a few more shots before completely discarding it from potential upgrades.

Vampiric Tutor in place of Cut / Ribbons has been one of the best quality of life improvements to the deck in a while.

One final thought is whether or not adding Retreat to Kazandu to the maybe board is worth it. The deck can burn through life surprisingly fast and without finding a Zuran Orb you can end up playing on the backfoot the entire game. If anything it voids the first lot of lifeloss from Glacial Chasm and works great with Splendid reclaimation or Scapeshift . If anyone has any thoughts on the matter, let me know!

I'm not entirely sure on most of the numbers here, this is much more of a rough sketch. But one of the big reasons for the manabase having so much green is to facilitate sideboard options like Prowling Serpopard whenever there's countermagic that also works as a fairly decent-sized body for the cost. Sure it's no Steel Leaf Champion but it's probably a little much to ask GGG of this deck. Goblin Chainwhirler is probably a little more feasible in that regard, and possibly something I do want to include somewhere in the 75, to punish x/1 decks.

Sweltering Suns is a 3-of because there's just enough floating around that I really, really want to be able to sweep the board if I have to. An argument to be made for Hour of Devastation but that does a number on my board too compartively.

Vine Mare is also in that double-green camp, to be brought in against basically any black-based deck. It can get awkward if I bring this in along with Suns, but there's also the potential to curve suns into horse and just run over a zombies deck.

Shapers' Sanctuary is another one of my pet cards that I've toyed with in the main in the past. In the right match-ups, this is a green ancestral recall. In paper I like to keep a die on it for my own sake, to keep track of how many cards it draws. The fact that it's only a single mana is its biggest selling point, being able to drop it turn one or two and then start deploying threats. I even use them against the aggressive red decks, because I can usually find a turn to slip it in.

Lifecrafter's Bestiary - Aka: Pokedex, one of the most absurd cards this deck can play in a long, grindy game. You end up with lots of land in play, get a scry 1 before your draw, and the ability to make every creature into a cantrip on cast...

Struggle // Survive - This was once part of the maindeck, but the key difference between it and Spit Flame is the ability to kill Bolas/Steel Leaf on turn 3. These are for dealing with Scarab God and Torrential Gearhulk, along with any huge creatures that're too big for other means... although I probably won't be killing Giantosaurus or Ghalta with one anytime soon.

This is a cool idea, and I'm making a similar deck myself. I don't have a link, sorry, because it's not on TappedOut yet. Also, if I come across as harsh, I apologise for that.

Moving on the the deck (and hopefully helping) the first thing is you should be playing around 26 lands, maybe 27 if you have cycling deserts. Next, although it sounds counter-intuitive, you actually want fewer dual lands. The strength of Hour of Promise is that it can:

Therefore, you want to play 7-10 deserts. Particularly Ipnu Rivulet, as that becomes one of the main win conditions (along with Banefire in this case).

Next, your deck lacks focus. It has some of the strongest cards in standard, but that doesn't help if they aren't doing anything for your deck. This deck doesn't want cards like Goblin Chainwhirler, Nezahal, Primal Tide, Soul-Scar Mage or Wizard's Lightning, because those are aggressive cards and you're building a ramp deck.

Instead, consider things to help you stabilise against aggro, forr example Sifter Wurm, Pelakka Wurm or Krosan Druid, as well as removal like Abrade, Struggle / Survive or even Consign / Oblivion.

Finally I would reccomend playing Gift of Paradise in some number, possibly over Grow from the Ashes. While Grow can be more explosive, you need padding for your life total again.

Then tweak the numbers a bit.

Hopefully you don't mind this long addition, and I wish you luck in the building process!

Hey w33m4n, thanks for the upvote.

Most green removal such as Naturalize, Plummet, etc. will go in the sideboard. Honestly Blossoming Defense is the best pseudo removal for green with creatures who are attacking.

Red helps a lot with removal Harnessed Lightning currently main deck. Abrade, Struggle / Survive, maybe even Glorybringer are more options for sideboard removal. I'm currently not worrying about a sideboard because it's way too early, Dominaria hasn't even been released :)

Green fight removal such as Pounce, Prey Upon or Ancient Animus are cards I would like to avoid, even though they're good with Steel Leaf Champion and Rhonas the Indomitable. If I was playing mono green then these cards would be options. Territorial Allosaurus is the exception for fight removal, expect me to play a few copies of this Dino in the sideboard for midrange matchups. I like very much that Adventurous Impulse can find Allosarus, thus find creature removal.

Hey, you're welcome. Haha, Elf lord, nice. I didn't know I had such a reputation here for a nickname; I like it :)

Deck looks good I like the changes, it's nicely streamlined. Consider 4x Hashep Oasis? Oasis is a very good land for green stompy. Mostly because it can be a turn one land drop that ETB untapped for Llanowar Elves and then can be used later on to pump a creature. It's great in combination with mana dorks because you can sac Oasis to pump one of them for an attack or they can help to pay the four mana to use Oasis with another creature.

I'm finding the interaction between Adventurous Impulse and Oasis to be excellent. If it doesn't find a creature in the mid to late game then finding Oasis is the next best thing.

Consider Nissa, Vital Force? As a curve topper she can be a beating with 5/5 haste lands(Forests) combined with trample from Rhonas. By herself her +1 ability can allow Rhonas to attack, that's good. Her recursion ability is quite good with green creatures and Oasis because they're permanents.

Other than Champion I think if you want to play these cards then a mono colored deck is the only option. Champion can be played in a two color deck because green has mana dorks that can make green or another color, Servant of the Conduit and Aether Hub energy interaction.

I'm playing Champion in a two color deck Gruul. I get away with doing this because of Hub, Unclaimed Territory and one of my strategies is to make a lot of green mana. I'm also not playing a land in the manabase that can't make green mana for a creature.

The interaction between Llanowar Elves and Champion I feel makes mono green the new stand out for a mono colored deck in Standard mostly because mono red aggro is a good matchup for you. Black with the new Shade, new Coffers, Cast Down and Vraska's Contempt is next. Black could gain the upper hand on all other mono color decks especially green because of Cast Down, having better removal options.

Cast Down minus Ghalta and Seal Away can remove all your creatures at instant speed for two mana. Blossoming Defense to prevent this is going to be a staple for green.

The only reason to splash a second color which is something consider is to play better removal then Pounce.

Black for Fatal Push, Cast Down and Hour of Glory(budget). Red for Abrade, Struggle / Survive and Harnessed Lightning which you can take better advantage of with Servant of the Conduit's energy. White for Seal Away, Cast Out and Ixalan's Binding. Blue for Negate, Blink of an Eye and Unsummon.

For a splash black is a very good option because of Blooming Marsh which can cast Llanowar Elves or Fatal Push turn one. It can also ETB untapped for a turn three Steel Leaf Champion.

20 Damage to the Face

Pretty good suggestion. Ive always hoped to use Blessing in a standard deck. Here it isnt the power move I need to finish opponents. Struggle / Survive does the a better job and shuffles opponents as well. But the biggest factor is Gaes 2CC. Just too low. Thanks though!