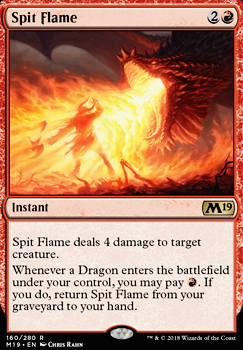 Whenever a Dragon enters the battlefield under your control, you may pay . If you do, return Spit Flame from your graveyard to your hand.

Spit Flame occurrence in decks from the last year

How To Train Your Elder Dragon (Jodah Dragons)
by airheartMatt 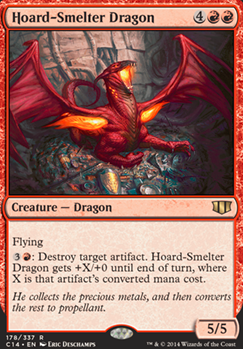 Them There Be Dragons
by Dave-writer90

Looks like a lot of fun! I'd consider trying to squeeze some Dragon's Hoard in here - without a recurring source of card advantage you're going to struggle real hard against any control or controlly midrange deck that can one-for-one your threats as you play them. Spit Flame might be worth considering in sideboard against decks that swarm you with more creatures than you're capable of blocking.

Silverdrake I'm currently debating about Foul-Tongue Invocation as well. I originally included it for the sweet dragon flavor but it actually proved itself decent: the lifegain helped against fast decks and the edict actually saved me against a couple ulamogs and bogles.

I thought about Spit Flame too but currently I can't decide if I want them, 3 mana for creature-only damage seems expensive.

How do the Foul-Tongue invocations play for you? I feel like 3 mana for an edict and some potential lifegain is pretty lackluster. I'd consider swapping them out for Spit Flame s for the psuedo-card advantage they provide. They can also combo with bolt, roar, glorybringer, or even sweltering suns to take out bigger creatures that you otherwise might not have been able to kill.

Whatever you decide to do, have fun with it!

Draconic Domination but I want it to be better

Not sure what your budget is, but here are a few affordable cards that make the deck significantly better :)

I don't know how on-board I am with the Fae of Wishes plan. Your curve of Dragons starts at 4, so do you really want to be taking turn 4 off to tutor for a 3-drop out of the sideboard? I think I would go a little more brute force. Go up a Crux of Fate or two. It's a 5-mana Plague Wind in your deck.

I like Spit Flame in the build, since it's a little grindier than most dragon decks, so it slows down the game a little and provides card advantage that pairs well with Bolas and your discard. I also HIGHLY recommend a couple copies of Hypersonic Dragon . Go up to the full 8 Thought Erasure and Thought Seize, and you can snag cards out of hands during the opponent's draw phase, locking them out of topdecking anything sorcery speed.

I would lose Necromaster Dragon. The mill backup plan just doesn't have the density of action to really be effective, and it doesn't even hit your own graveyard to fuel Delve.

The sideboard definitely needs more Stormbreath. That thing wrecks decks leaning on white removal. If the deck were to trim some of the blue, allowing the deck to rely more on Sarkhan and a redder manabase, I would suggest Sweltering Suns . Otherwise, Flame Sweep would be good early removal, and Cut / Ribbons would be good, too

Thanks for suggestions. Did not put Wild Pair because it costs lots of mana and that slows the deck down. Dragon Tempest , Where Ancients Tread , Warstorm Surge , Spit Flame and Crucible of Fire seemed unnecessary to me because I won't have more than a few dragons on the battlefield. If you have more than 3 or 4 dragons out at the same time, you have practically already won. Living Death is very nice, but I put it in another deck so Primevals' Glorious Rebirth kinda replaces it. It's full of flavor if nothing else. Did not include Grow from the Ashes because i needed ramp that searches for gate lands because of my alternate win condition. Fist of Suns also seems too slow for me. You can't use it at all untill you have 5 different mana, so simple mana rocks have greater potential, I think (you can turn 5 ur dragon with mana rocks AND you can use them before that turn for other things). But thanks for ideas anyway, some cool cards i didn't know about.