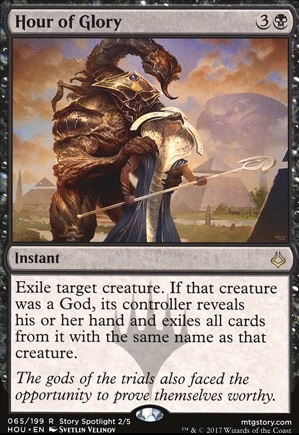 Exile target creature. If that creature is a God, its controller reveals his or her hand and exiles all cards from it with the same name as that creature. 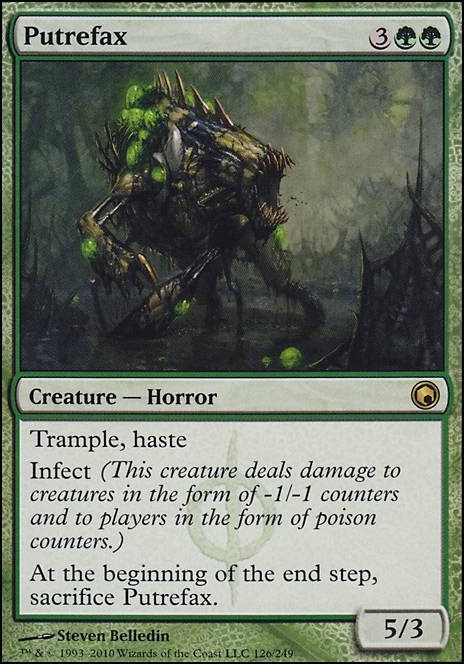 This deck looks interesting and janky.

I also spy you have things you want in the 'yard and you run Wrenn and Six. I don't quite see why you're running Wrenn right now, but that can be easily justified.

Faithless Looting is extremely good at both of those things. The card selection and ability to filter away the lands you're recurring with Wrenn is amazing. You can also pitch things you need to pitch if need be, like a card you want to bounce back with the Arcanist.

I'd also say see if you can fit in some of the cycling lands, because they're cheap and enable Wrenn on a whole new level. Lonely Sandbar would probably be the one you want for this deck.

A copy or two of Hour of Glory may also be in order, as it can enable a Turn-2 Rhino slam dunk alongside Faithless Looting .

Look at me, I am the Captain now

Not yet, but I'm planning on getting this deck for MTGO and playing some competitive leagues to see how it does though. My best guess not knowing the matchup perfectly but knowing both decks well is that Red-Black probably wins Game 1 due to lack of permanent answers to things like Hazoret the Fervent and Scrapheap Scrounger and the fact that main deck we have a lot of X/1's that die to Goblin Chainwhirler. Games 2 and 3 I think the deck has a much better shot as we board out some of the X/1's for Gifted Aetherborn and bring in the rest of the Hour of Glory to more permanently deal with Hazoret the Fervent and Scrapheap Scrounger. I don't know how those games go, as I haven't played the matchup yet; but I am pretty sure Games 2-3 the deck does much better.

Destroy all creatures with power 3 or less. (Hour of Revelation)

Creatures you control gain eternalize (their externalize cost is equal to their mana cost). You may eternalize up to 5 creatures in your graveyard, if you do you lose 5 life. (Hour of Eternity)

Exile all cards from all graveyards, then each player sacrifices all nonland permanents they control and discards their hand. (Hour of Devastation)

Exile all cards in your library except for the bottom five, then each player shuffles their graveyard into their hand and draws 7 cards. (Bye Bye Amonkhet)

The words on parentheses wouldn't actually be on the card, they're just there for the people that don't know the hours. Anyway, I think this would be a really good card.

Challenge: Create a sage based on either:

A) The destruction of Ulamog and Kozilek on Zendikar

B) The trapping Emrakul in the moon on Innastrad

I would recommand to swap Hour of Glory for Vraska's Contempt ! Even if it's 2BB ( more colored ), I think it's worth to have an instant way to deal with a PW.