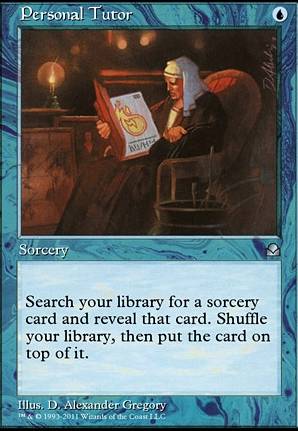 Search your library for a sorcery card and reveal that card. Shuffle your library, then put the card on top of it.

Personal Tutor occurrence in decks from the last year

This is a nice list. I do have a few suggestions though and I'll try to break it down by category.

Pillowfort: Smoke is worth its weight in gold here. You probably have enough extra turns/combats that you can drop the Propaganda/Ghostly Prison though.

Haste: Need for Speed, Mass Hysteria, and Hall of the Bandit Lord. If Narset gets removed a lot in your meta... also consider Dragon Breath, which auto-hastes Narset on recast.

Haste: Need for Speed, Hall of the Bandit Lord, and Dragon Breath (automatic haste whenever you recast Narset).

Feel free to check out my list for inspiration. It's not budget friendly as a whole but still plenty of budget options. Upvotes on any of my decks are appreciated. Narset, American Beauty

Augustin helps you to lose all you friends

SideBae Thank you very much for your suggestions! :)

I'm not a big fan of Counterbalance . Even if you can influence Topdeck well, it's too arbitrary. I want to leave as little as possible to chance.

I like the idea with Jace, the Mind Sculptor and also with Prismatic Vista and Force of Negation . I think I will add tutors like Personal Tutor and also Teferi, Time Raveler as another Stax piece. Maybe even Back to Basics on top of it.

Holy hell! Never realized how dovescape and taigam synergized like that. Damn! Azor's Elocutors would be another decent win con for ya. I would also consider adding a bunch more tutors to the deck so you can get to dovescape a lot quicker than luck of the draw. Hereâs a number of other tutors to think about:

Any reason why no Personal Tutor ?