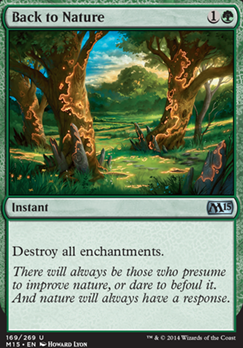 Back to Nature occurrence in decks from the last year

Last March of the Ents
by BritishBulldog97

The simics are at it again
by TonyMestre

Back to Nature Discussion

@Conaxi4783 - Thanks! it took about 4 hours just finish the description and about 2-3 days to finish the initial decklist.. Reanimate is a bit expensive, but if I have more budget, I'm definitely adding that..

@vediusmaps - True, but i only have 1 for my Willowmaker deck.. I might add it in the future.. I only chose Back to Nature and Dead of Winter for versatility of removals.. Thanks for the suggestion though..

@hamdeadly - i think Diabolic Intent and Eldritch Evolution is counterintuitive imo, since i don't want to sacrifice possible fodder for Jarad, to find a creature in my library.. Also since my graveyard is the zone where i would most likely get the best odds of finding a solution to the current situation.. Plus i have other tutors which can add creatures to my yard such as Jarad's Orders and Final Parting.. Demonic Tutor is good, but i currently lack the budget to buy one.. I'll definitely add that though in the future.. Thanks for the suggestions!

I'd recommend a few more basics, you run out of things to fetch pretty quickly if you're facing an opponent with Path to Exile , Field of Ruin , or other staples. Not sure which lands I'd swap out, though. Also could use some enchantment hate in the sideboard, Back to Nature ?

For a commander like Ezuri, you might find you want a higher concentration of creatures. My version of Ezuri has 37 creatures currently and I still have times I can't buy a creature to cast.

I would cut a card like Back to Nature because its a bit of a nonbo with Hardened Scales and Simic Ascendancy [it would suck to be really close to winning with ascendancy but needing to kill an opponent's enchantment and having only Back to Nature to do it] and add in Trygon Predator so you still have access to additional removal but have another creature to trigger your commander.

Forced Landing seems a bit narrow for removal. I think another cheap creature or counterspell would provide more benefit in this slot.

I do like your inclusion of Stonecoil Serpent . I may try to find room in my version for it.

Back to Nature is a strictly better version of Tranquility

The deck is looking good

Marisi - Me Smash, You Smash

Gleeock Which is why I was even considering Back to Nature , even though that only deals with enchantments. I do have Cleansing Nova and Rampage of the Clans as Budget versions, though another one would definitely help.

So with Crucible or Excavator, you'd want to discard lands because you'd know you could cast them from the graveyard. So you'd be able to keep spells you need in your hand. Additionally, both really hose stuff like Ghost Quarter , Field of Ruin , and Beast Within against your Mazes. So even it not mainboarded, 1x of one of them might be good in your sideboard.

The only downside I can see to Reliquary Tower is the slot(s) it takes up in your mana-base and the land-drop you have to make that isn't a Gate. All in all, seems pretty great.

I'd say move the Lantern to the Sideboard or cut it and add to your sideboard Prismatic Omen or some sort of Enchantment/Artifact removal - Disenchant or Revoke Existence or Erase or Oblivion Ring or Return to Nature or Back to Nature or Felidar Cub if you're afraid you won't have white mana available.