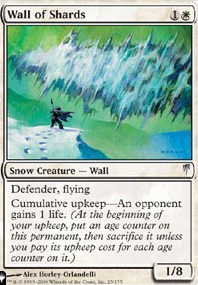 Cumulative upkeep-An opponent gains 1 life. (At the beginning of your upkeep, put an age counter on this permanent, then sacrifice it unless you pay its upkeep cost for each age counter on it.)

Wall of Shards but I think youd be better of with more basics instead of the cycle lands.

OK. I thought about it. I shouldn't have to merely rely on sources for Creatures w/ Higher Power, Toughness, or Equal of both. So, I ask you. Pretend I was using a Source like Scryfall Advanced, & I wanted to find a list of Creatures either of Higher Power, Higher Toughness, or even Equal stats (0/0, / & Variable + (0/X)/Variable + (0/X) also applies if you wanted other options.).

I've been trying to find a way for the longest time, that & an actual Artwork of the real Zilortha, Strength Incarnate; which is unfortunately, an Alternate name for "Godzilla, King of the Monsters". & find a good Mono- (Yep, I'm going there yet again.) utilizing Anti-Counter Strategies such as Solemnity, Lotus Bloom (Does Suspend Count?), Wall of Shards (What about Cumulative Upkeeps?), even Mothra Herself will make us appease her in honor; even if it's alongside 2 Mystical, Miniature Maidens. XP. Might as well throw in Phyrexian Unlife & any conventional ways to lose be locked out as options to lose.

Backtracking to Point 1: Does anyone have a Way to search only for Creatures w/ Higher Power, Toughness, or Equal Stats? I'm interested to know. :D

(Maybe I'll even bring The Temporal Cracking in Reality

back for another try; someone might have found a great use for him...)

if you want to have fun and cock block other life gain decks, i suggest Tainted Remedy + Wall of Shards. your mana curve does seem to be a little on the heavier side though without mana dorks. you have 15 cards that are more than 3 mana which is steep considering the fact that the faster side is only 20 cards. i assume gray merchant and bond is your win con here. assuming you get all the mana, you wouldnt be able to pull it off before turn 6. modern should typically run a turn 4 win, unless you have a way to stall with counter spells and kill cards to remove important pieces of your opponents win con. something like Leaden Myr may help with the speed of your higher cost cards. provides optional fodder too.

Boza on Does Wall of Shards' culumative â¦

1/ No - You cannot pay the cost in that case and will have to sac the wall.
2/ Yes- Cumulative upkeep asks you to choose, not to target, thus an opponent with hexproof is a valid choice.
3/ Yes - you can split that payment in between multiple players. From Gatherer on Wall of Shards :

"When paying Wall of Shardsâ cumulative upkeep, you may choose a different opponent for each age counter, or you can choose the same opponent multiple times."

There is no priority for any player during this action - the choice of opponents and said opponents gaining life happens during the resolution of the ability.

I have three questions regarding this card: Wall of Shards

1.) I have Wall of Shards and an Everlasting Torment on the battlefield. Because my opponents are unable to gain life would I be unable to pay for Wall of Shards 's cumulative upkeep cost and be forced to sacrifice it? (I know this has been asked if it works with Tainted Remedy , but is "Players can't gain life" also a replacement effect or something else?)

3.) I have Wall of Shards on the battlefield and two opponents. Upon upkeep I put a second age counter on Wall of Shards and pay it's cumulative upkeep. Can I pay the cost by making both my opponents gain 1 life each? If so do both opponents gain life at the same time or must I choose priority? And if there is priority can I cast spells between each instance of life gain such as recurring and casting a single Punishing Fire from the graveyard multiple times?