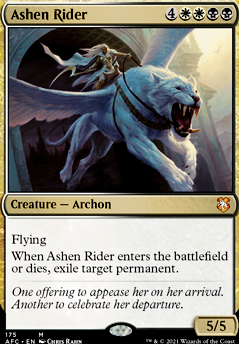 Gravestone, Forge of the Damned

Ashen Rider could be a great 1-of

Thanks for commenting tman007!! You bring up excellent points.

I have been conflicted with running Terastodon since I first started experimenting with this build. While it can be useful in certain situations (when multiple artifacts, enchantments, or lands must be removed), I concur that I would prefer a fourth Archon of Cruelty , so I am dropping Terastodon doe now. I am running Ashen Rider strictly for removing indestructible cards, which is especially relevant against other Stoneblade decks with Kaldra Compleat , etc.

Iâm also experimenting with keeping the deckâs CMC and land count as low as possible. You are right that running 18 lands makes it difficult to unearth Priest of Fell Rites and play/flashback Unburial Rites , but the deck can theoretically function and win with only two lands. For now I have returned to 20 lands, which seems to be the sweet spot.

Nice deck, the red splash for Thrilling Discovery is interesting and helps offset some of the weaknesses of B/BW lists with the lifegain and draw effect. I do think I would rather have another Archon of Cruelty over Ashen Rider or Terastodon , they do similar things and Archon's effect is much stronger than both in most cases. Also, 18 lands might be a little low in games where you need to cast Rites or unearth Priest.

TransMarx Thanks for the thoughts! This is a different direction than what I've been going in, but I'll give it a try and see if it works better.

I've never dropped below 3 Archon of Cruelty , that thing is insane when you don't pay full price. I've been looking for replacements for It That Betrays (killer with haste, vulnerable without it), and both Ashen Rider and Terastodon were on the short list. It's probably time to make that change.

Bone Shards is great and worthy of at least a sideboard slot, if not main deck. Liliana of the Veil comes down when this version of the deck wants to be dropping its finishers, but I'll try it alongside your suggested line. I tried Unmarked Grave for a while, but there was only enough space for so many MV2 graveyard fillers, and Collective Brutality and Thrilling Discovery did enough in initial testing to make the cut. I'll revisit it, since it will help reliability, but in the end it's a one-trick pony. If Dark Ritual ever shows up in Modern (not gonna happen), Unmarked Grave would be jammed in immediately.

reanimator is a tough build rn, as dredge is a forever staple to the format (always middle of the pack at the least, and top tier when new tools are printed) every deck will just have great sb options against you even if you pop off game 1, secondly in modern you kind of need your deck to be doing a few things to be viable. Can't just go ALL IN on one strat, the more diversified your play style and more modular your deck the better it holds up in a format with many answers.

my suggestion would be stretch the deck into a midrange/reanimator style deck for reanimator targets I'd stick with Archon of Cruelty as a 3-4 of and add a singleton of Terastodon and maybe an Ashen Rider essentially all your reanimated creatures have to DO SOMETHING as soon as they hit the board.

like Bone Shards is a fantastic target removal spell, Liliana of the Veil would be a house in this deck. also why no Unmarked Grave ?

but yeah got to diversify the deck to do more than one thing, get some just solid value out of everything that is played and like honestly no more than 3-5 reanimator targets MAX.

Yeah Coat of Arms would be pretty crazy, but also unless I'm wrong, the triggered ability off of Felisa isn't actually a spell, you'd have to actually cast a spell with black in it (i.e., something like Eradicator Valkyrie or Ashen Rider ) for the Deathbringer Liege part to work. The token creation is from a triggered ability, not a spell. Nonetheless, liege also pumps all the tokens by +2/+2 and you still are casting black and white spells for the other triggers so I'd agree, it could probably stay, but you would not get triggers from the token creation as they are abilities not spells.

Also, I think blade of the bloodchief should still definitely be in the deck somehow especially with the minor Vampire tribal, but sword of t/w is quite insane that definitely has to go in.