At the beginning of your end step, manifest the top card of your library. (Put it onto the battlefield face down as a 2/2 creature. Turn it face up at any time for its mana cost if it's a creature card.)

Sacrifice Whisperwood Elemental: Until end of turn, face-up nontoken creatures you control gain "When this creature dies, manifest the top card of your library."

The Easiest Combo ever
by jameswilkinson70 at yahoo dot 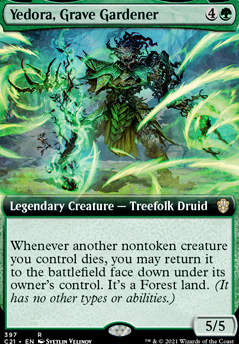 All My Homies Hate Public Knowledge
by BrendoFTW

Not sure if you know this but minsc x ability allows you to pay 0 and effectively sac creatures. any sort of mob rule effect would be gr8 here.also works really well with creatures that enter with x+1+1 counters but are still 0,0s. Sequence Engine is the best I can find budget wise to do that

Some suggestions that don't exactly replace anything exactly. Champion of Lambholt for unblockable by weenies.Beast Whisperer Guardian Projector some more creature card draw from green. Whisperwood Elemental for boardwipe protection

Duelist's Heritage over Mage Slayer might be budget esc for simular effect.

Nevinyrral's Disk has been printed recently, so its fairly cheap and helps the gameplan.

In terms of dies triggers, Thragtusk or Whisperwood Elemental are the ideal 'leaves behind a body', persist creatures like Safehold Elite or Heartmender offer some extra options. Blisterpod and the like exist, but 1/1s are rarely a fast enough clock to close out before the boardstate gets big again.

If I was trying to push this to fnm competitive, I'd throw in Upheaval and mana rocks to try and get a reliable '6 mana, win the game' turn.

twechsler, as far as I know, only the creator of a deck can look at the acquireboard. So for me to evaluate any cards there, you'd have to move them to the maybeboard first. I'll give my thoughts on some of the aforementioned cards for now at least.

Woodland Wanderer needs to be cast with Converge 2 to be decent and 3+ to really be good, so I probably wouldn't add it to a mono-green deck. For Wakewood Elemental, I'm assuming you meant either Wakeroot Elemental or Whisperwood Elemental . I really like the latter in midrange decks and would have no qualms about adding it here. The former, on the other hand, costs too much to activate its ability while leaving your lands open to creature removal. Liege of the Tangle sort of does the same thing but better, although you do need to be very cautious of Wrath of God s with it too lest you immediately lose all of your permanents. Omnath, Locus of Mana is a very insane card in the right circumstances, hence its similarly insane price tag. I've seen players go off with Nykthos, Shrine to Nyx and Gaea's Cradle to produce hundreds of mana in a turn without any major combos and save up for something ridiculous like Helix Pinnacle or Finale of Devastation . In your deck, it looks more like you want to be using all of your mana on each turn to curve out into larger and larger threats. Omnath would still be good, but I don't know that he's worth the price right now. Speaking of expensive cards, Wurmcoil Engine might be something to look for since it's both a strong bomb to ramp into and has deathtouch on 2 of its 3 bodies. Asceticism is another that's good for keeping guys alive.

A card I missed talking about in my last comment is Predator Ooze . It's definitely interesting and I see it working well in a Hardened Scales stompy deck alongside its +1/+1 buddies, Experiment One , Pelt Collector , Avatar of the Resolute , etc. If you're not running ways to take advantage of counters, maybe Steel Leaf Champion would perform better in the 3-drop slot. I'd still be more inclined to put a mana dork or Cultivate or Harrow or something there instead. It just depends how fast you want the deck to be. Stompy doesn't usually run many cards that cost more than 4 CMC, so you'd need some major tweaks to move in that direction.

(Mew). Like Mewtwo, I tried to replicate the original Mew pokemon card, except I reversed the direction Mew was facing. I figured it would look better if Mew and Mewtwo were facing each other in the command zone.

mccabej140 I think it's an effect that is like manifest, so every color should access it, you can't start making new manifest cards and forget to make a newer version of Whisperwood Elemental!

Basically, it seems like a 5c mechanic, nothing seems especially white about it to me xD, but I mean I am unopposed to it, just put it in a conspiracy thing.

Personally I think Monarch is what they should bring back for white.

Oh, and yeah enpc is right, as we have seen from decks like D&T from legacy, the best stax has proven incredible results against the most busted combos, and white is by far the best stax color in the game.

Hi_diddly_ho_neighbor on What Was Wrong with Battle â¦

The short answer: fetch lands. Everyone was playing hyper-powered 3+colored decks. There was also the scourge of standard at the time: Siege Rhino . Fate Reforged introduced the Whisperwood Elemental and Monastery Mentor decks. Dragons brought in cards like Atarka's Command making fast aggro decks prevalent. The Dragonlords also gave control a big boost. Plus at some point in that time-frame there was a Rally the Ancestors deck performing well in Standard. Origins introduced Hangarback Walker and the flip walkers, all of which (besides Chandra) saw play.